Search the best hotels in Austria

All our Austria collections:

Austria has something to offer every kind of traveller. There's rich cultural heritage, excellent food, grand art and architecture and the landscape of mountains and alpine lakes which is considered one of the world's most beautiful backdrops. So there's plenty of choice when it comes to planning your Austrian experience and choosing the best places to stay in Austria.

This ancient country occupies Europe's crossroads, something it's experienced only too well during both World Wars. Despite feeling old, Austria has only been a nation since 1918, and each of its nine federal states still has a separate feeling and identity, and its own special place in history. But, as well as being at the crossroads, Austria can also be said to occupy Europe's heart. A moderate, very European feeling country boasting plenty of Europe's best assets from Vienna's magical one-of-a-kind architecture to the spectacular alpine ski fields and lush, green, musical Salzburg.

Ah, Vienna! The Austrian capital has always been dignified, but there's a thick layer of whipped cream around almost every corner. Its baroque architecture, art galleries and museums, rich musical heritage and cafés and cakes have been magnets for tourists since the days of the Grand Tour.

Graz is Austria's second largest city, and an ancient one, having been founded by the Romans and enjoying its heyday between the 12th and 15th Centuries. Modern Graz is considered a centre of learning and is one of the best places to stay in Austria to experience its rich culture and heritage.

Salzburg's two famous claims are Mozart and The Sound of Music. And yes, musical this town is; walking around the Heritage listed Altstadt you'll hear recitals drift from the many churches. And down side streets, you'll hear snatches of classical music pouring from open windows. But Salzburg is also very beautiful, something Mozart himself was very proud of.

Zürs, Lech and St Anton are part of Lech Zurs am Arlberg, one of the world's great ski destinations, and skiers only need one pass to ski this whole winter wonderland of 80+ inclines and over 276kms worth of slopes. As well as getting excellent snow coverage, this location is also spectacularly surrounded by the Alps. Until the end of the 19th Century, Lech spent the winters cut off from the outside world, and the traditional village look remains. Pretty and popular, Lech is the kind of place you're likely to see Bentleys with snow chains.

Kitzbühel's charming medieval centre makes a pretty addition to one of Austria's best ski resorts, known for its skiing, restaurants, apres-ski and off-slope activities. Kitzbühel's historic Tirolean centre is pretty and pedestrianised and there are plenty of nice boutiques to poke around in and cafes to people watch in. On race weekends the town is packed with around 70,000 spectators, so there's a lot of life!

Innsbruck sits nicely between the city break destinations and the skiing destinations, as it offers both. You can spend one day exploring grand Habsburg palaces and the next day skiing in this relaxed, and exceptionally beautiful, Tyrolean capital.

The best places to stay in Austria

For Zürs, Lech, and St Anton

If you'd like the privacy of a self-catering option then browse through the available options with our partner, Booking.com. 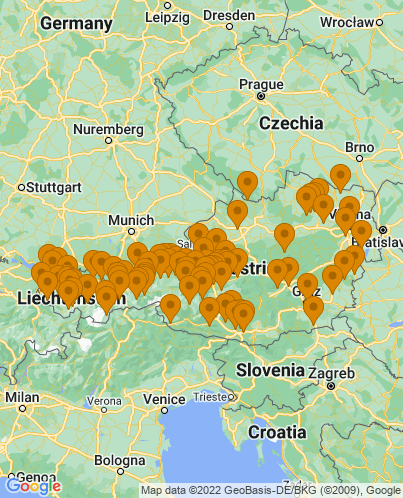