Search the best hotels in Bhutan

It’s undeniable that every destination is unique, but, if you’ll allow us, Bhutan is more unique. This is partly because of the country’s approach to visitors. The idea of Gross National Happiness is very important in Bhutan, so as far as being a guest in their country goes, you’re most welcome, but you will need to pay a minimum fee of about US$250 per person per day, to ensure the Bhutanese get the best value from tourism and the country isn’t overwhelmed. This is a magical Himalayan Kingdom where change has been slower to come, so it’s certainly unique in that sense as well, and the Bhutanese sense the value in keeping it that way. US$250, for many of us, is expensive. But that can include your food and transport and your official guide, which you have to have, so it’s not as bad as it first sounds. It does mean the prices of some of our recommendations for the best places to stay in Bhutan look high, but when set against the daily minimum they make sense.

Bhutan is deeply Buddhist, and Buddhist values permeate everything here, so it can feel quite traditional, but this isn’t a country frozen in time, the people are generally very outward looking and well educated and informed, and it’s this careful blend of old and new, where the best bits are valued, that makes Bhutan such a fascinating place to visit. And that’s what makes some of the best places to stay in Bhutan so fantastic. Some of our favourite Bhutanese hotels are part of traditional lodge or palace complexes, where you’ll find ancient hot stone baths on modern spa menus, or elegant, modern rooms heated with beautiful traditional stove heating — or the other way around: traditional style rooms with underfloor heating.

Out of the windows of the best places to stay in Bhutan you’ll see the real reason many people come here. The Himalayan views of snow-dusted peaks and deep, primeval forests, of valleys carved by ice and dotted with temples, monasteries and story-book-worthy traditional villages. Bhutan’s slower, thoughtful approach to change means this landscape has remained the same for centuries, pristine almost, and the opportunities to walk in the Himalayas are second to none.

Use our guide to the best places to stay in Bhutan and start to plan your trip to this fascinating little-discovered country.

The Best Places to Stay in Bhutan

Some of the Best Bhutan Escapes

Some of the Best hotels in Rural Bhutan

See all » 5 hotels in Thimphu

See all » 3 hotels in Punakha

See all » Other hotels in Bhutan

See all » 5 hotels in Thimphu

See all » 3 hotels in Punakha

See all » Other hotels in Bhutan 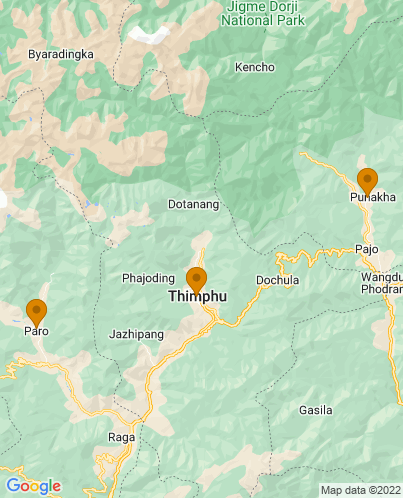