Search the best hotels in Cuba 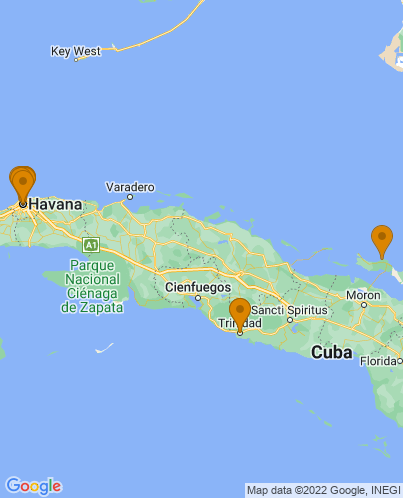 Dilapidated in parts, but with its full complement of elegant dignity, Cuba has escaped the worst things about the modern world, as well as having missed out on some of the more convenient things. Half a century of embargo shows, but that’s why this county is so unique and unexpected. Havana is vibrant, magnificent and magical, Cuba’s coastline of alternating white sand and jungle hasn’t changed since the days when pirates buried their treasure on these shores, and there are some heartbreakingly charming colonial towns and cities which it’s hard not to fall in love with. The interior is still a bit wild: abandoned coffee plantations are edged with crocodile infested swamps on one side and rugged mountains hiding secret revolutionary bases on the other. And the best places to stay in Cuba are dotted in amongst all this.

Most visitors see Havana and the beaches of the northern coastline, but if you go beyond this you’ll find one of the last destinations which you can really feel like you’re exploring. While also knowing enough about this country’s history for it to feel exciting.

The trade and travel bans which have prevented Cuba keeping proper pace with the rest of the world might almost be considered a gift to visitors to Havana, because this city is magical! From the old American cars to the bright, peeling colours the graceful old houses are painted, to Che Guevara - who looks back at you from numerous walls, murals and t-shirt covered chests, to the crumbling sea wall and the constant rhythm in the air. Pirates, revolutionaries, Hemingway, salsa: Havana’s history is so rich with fascinating stories that you could spend your whole visit unravelling the past and entirely miss this city’s indefatigable charms.

Santiago de Cuba is considered by many to be Cuba’s cultural capital, and many of us know it as the place from which Fidel Castro launched his revolution. It’s also where the first Bacardí factory was located. And it’s got some seriously inspiring religious architecture. But what most visitors will feel when they come here is this city’s proximity to the Caribbean, rather than to the west.

Camagüey is also known for the arts it produces and the culture it treasures. Like a smaller, sometimes even more suave Havana, Camagüey has the same pastel coloured colonial townhouses and warren of close knit streets. The bars are often as fresh and colourful as the galleries, and the historic centre of town is a UNESCO World Heritage site.

For a taste of colonial Cuba under the Spanish visit Trinidad, which hasn’t really changed that much since about 1850. This is where the sugar barons came from, and there are some breathtakingly extravagant colonial mansions, complete with all the mod. cons. of the time, like china by Wedgewood and chandeliers imported from France. And when the day-trippers leave the local music scene hots up.

If you want revolutionary tales you should visit Santa Clara. Che Guevara’s liberation of Santa Clara in 1958 marked the end of the Batista regime, and there have been mini-revolutions happening here ever since. This is where new trends evolve and boundaries are pushed. It’s also where Che’s remains are housed.

Varadero, on the Hicacos Peninsula, is one of the largest resorts in the Caribbean, with one of the most beautiful stretches of white sand you’ll probably ever see, or even imagine. Expect big hotels and an endless summer holiday vibe, but not so much in the way of the real Cuba. If you’re looking for a more Cuban feeling costal city try Cienfuegos, which is an elegant, French-built, nautical feeling city built around a spectacular bay. It’s oft referred to as the ‘Paris of the Caribbean’.

Cuba’s islands are another reason to visit. Isla de la Juentud is close to Havana, and has the kind of perfect white beaches the Caribbean is much loved for. The Jardines del Rey group are known for their resorts, and for their diving and snorkelling. And the national parks are incredible. Go to Viñales national park for its caves and mountains, the Gran Parque Nacional Sierra Maestra for its cloud forests and for Castro’s hidden rebel headquarters, and the Ciénaga de Zapata National Park, which looks something like Florida’s Everglades, for its birdwatching, and for its diving - this is where the Bay of Pigs Invasion took place.

Use our guide to the best places to stay in Cuba and start to plan your trip to this fascinating destination before it catches up with the twenty first century!

The best places to stay in Cuba

For a Beach Escape

For a self-catering Apartment or private Villa

Still not sure which is the best place to stay in Cuba for you?