Search the best hotels in Colombia

Colombia has a diversity of landscape, climate and cultures which should make it one of the world's most popular travel destinations. The jungles, including swathes of the Amazon, are some of the world's least explored places, hiding ancient temples and astounding ruins. Colombia's cities offer both the grace of their colonial heritage and the vibrancy of modern South America, rivalling the region's most colourful and culturally varied cities. The mountains are high - perfect for both trekkers and skiers. The beaches wouldn't seem out of place in a Caribbean travel brochure, and there's whale watching, diving and surfing opportunities just off the coast. Basically Colombia is paradise. The deterrent for most visitors has been the drugs and the violence, and this is changing, so use our guide to the best places to stay in Colombia and take the opportunity to experience this paradise before it becomes too popular!

If you find the freshness of Bogota a bit nippy, drive for an hour down the mountains to where it's warmer. Lower still are the lush jungles, coffee plantations and the Reserva Natural Canon de Rio Clara. Just one of many beautiful Colombian reserves, the Rio Clara Canyon, with its strange marble bed, is particularly spectacular. And this is a great spot for anyone who wants to get into Colombia's great outdoors and do some hiking or kayaking. The coastline is tropical - almost right on the equator, and things are naturally more languid and happen at their own pace. Beautiful Cartagena is probably the country's best known destination and it remains one of the best places to stay in Colombia. Once an important and wealthy port on the gold and silver trade routes, Cartagena was made glorious, and well fortified, and it is the fairytale remnants of this which have qualified it for Heritage Listing.

Use our guide to the best places to stay in Colombia and start to plan your South American adventure!

The Best Places to Stay in Colombia 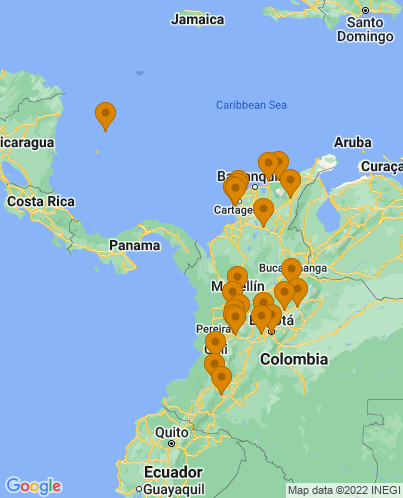