Search the best hotels in Bologna 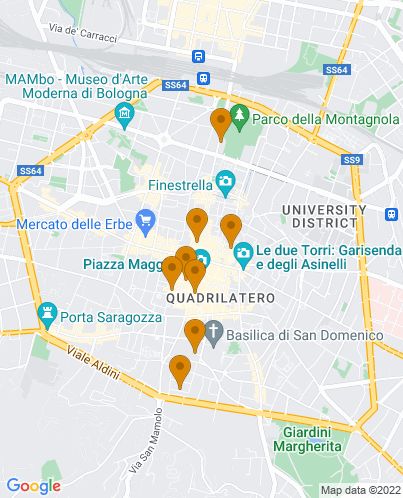 Elegant terracotta coloured buildings arc around peaceful pedestrianised squares, also home to some of Italy’s best trattorias and restaurants. Their famous covered porticos create a romantic effect along the historic grid of the city which dates from the medieval period. Many of the best places to stay in Bologna can be found on this grid, but if you'd rather something a bit more modern, then you’ll find what you're looking for in the edgier parts of town around the world’s oldest university.

Despite its beautifully preserved historic centre and penchant for wonderfully traditional cuisine, Bologna is thought of as a progressive city and if you enjoy political or philosophical debate then this town is for you.

Bologna is a great city for getting around on foot, there are just so many beautiful things to see. You’ll also be sure to see lots of bikes.

As far as your explorations go, start on the Via Rizzoli or the Piazza Maggiore and don’t skip the Fountain of Neptune or the any of the 666 porticoes, which begin at the Porta Saragozza at the end of the Via Saragozza. If you’re looking for a lively cafe or bar head to the 900 year old University Quarter around Via Zamboni.

Don't forget this is a busy city year round, for both business and leisure travellers. So if you want to secure a room in one of the best places to stay in Bologna, get organised and book ahead.

For a city centre location

Still not sure which is the best place to stay in Bologna for you?