Search the best hotels in Myanmar

Even those amongst us who are lucky enough to consider themselves well travelled speak with shining eyes of Myanmar, which was, until fairly recently, referred to by most of the world as Burma. This is a country scattered with beautiful Buddhist temples, stupas and pagodas, some grand and gilded and some small and simple, but you’ll find them sitting proudly on hills and hidden deep in forests. There are 4000 sacred monuments on the misty plains of Bagan alone. And with these many monuments you will see many monks. And these two factors, probably more than any other, are what make Myanmar so unique. This is the Asia of antiquity. This introduction may leave you thinking the accommodation might be a bit aged too, but that’s far from the truth. Yes, some of the best places to stay in Myanmar are elegantly fading colonial era beauties, but if you prefer your accommodation more modern you’ll not have any trouble finding somewhere great to stay.

2015 marked a turning point in Myanmar’s history, the Burmese military stood back to allow a democratic election - the first for half a century. Since then other countries have started investing in Myanmar, and, at least in the larger towns and cities, you’ll find mobile coverage and a reliable internet connection. But in the rural regions you’ll still see people wearing traditional dress and using horses or bullocks and carts to get around. So now is a great time to visit. Generally you’ll find people open to sharing and learning, and incredible sights not yet swamped by visitors.

Most people start off in Yangon, which was the Burmese capital, Rangoon, until 2005. But despite being ’deposed’, Yangon is still Myanmar’s largest, and arguably most commercially important city. The architecture and design of this city is unblended British, Chinese, Indian and Burmese in style, and there’s plenty of majesty and quite a bit of crumbling. The best places to stay in Yangon are still the old colonial stalwarts, but they do have some ultra-modern properties if that’s more to your taste. Since 2005 Nay Pyi Taw has been the capital. It’s surprisingly empty, but its vast multi-lane highways are testament to the fact that the intention was for it to be a bustling hub.

Despite the romance in its name, many folk just pass through Mandalay, stopping off to see the Mahamuni Paya temple with its ancient 13 foot tall Buddha on their way. But it's certainly worth stopping for a while to look behind the modern zones with their concrete towers, and see the strange collection of mosques, temples, churches and pagodas and the countless monasteries lining the riverside.

Mystical Bagan, an area of misty plains on the beautiful banks of the Ayeyarwady (Irrawady) River, has the world’s largest concentration of Buddhist temples, stupas and pagodas. Bagan is often compared to Angkor, with the main difference being that Bagan's monuments are spread out over a much greater area, but not hidden by jungle, so your view is always full of great temples, stupas and pagodas. Some of the structures date as far back as the 11th century, but the area has been built on over the decades and every monument is different, with its own shape and significance to Buddhist history and thinking. Part of the magic of this place is the wonderful red colour of the monuments - visible now that the original stucco is eroding away and the red brick underneath is exposed - which, when added to the plants growing in and out of the structures, gives a feeling of graceful decay.

Like Bagan, but built across a hill, Sagaing is another popular place for visitors to see. Scattered with gold and white pagodas and stupas, the real experience of this place is walking the strange, winding, stair-filled trails between the monuments and monasteries.

And Mrauk U is another well known archaeological site, with less elegant, more fort-like temples, but still an incredible number, and this time arranges in amongst small villages and hamlets and the rice paddies and fields of crops which sustain them. If this site were in a different location it would surely attract more than the five thousand or so visitors it receives annually.

The Inle Lake region is also a headline destination: a huge lake, smooth and serene, surrounded by marshland and edged with floating gardens. As well as Buddhist temples, here you’ll find houses on stilts and an entirely unique style of rowing. The markets here are incredible, feeding the whole many-hilled region of villages.

If the works of Rudyard Kipling or George Orwell have anything to do with your choice to visit Myanmar then you’ll want to see Mawlamyine, a wonderfully crumbling colonial-era treasure which will give you a good idea of what life was like during the Raj. Hsipaw is also on the road-less-travelled route, and is a great place from which to set out on a hill trek. But it was also once a Shan royal city.

Use our guide to the best places to stay in Myanmar and start to plan your trip to this fascinating and incredibly beautiful country.

The Best Places to Stay in Myanmar

For a self-catering Apartment or Villa

Still not sure which is the best place to stay in Myanmar for you?

See all » 5 hotels in Yangon

See all » 4 hotels in Bagan

See all » 4 hotels in Mandalay

See all » 4 hotels in Taunggyi

See all » 5 hotels in Yangon

See all » 4 hotels in Bagan

See all » 4 hotels in Mandalay

See all » 4 hotels in Taunggyi 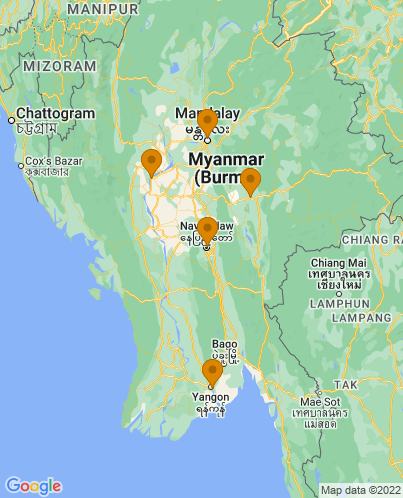