Search the best hotels in Caceres 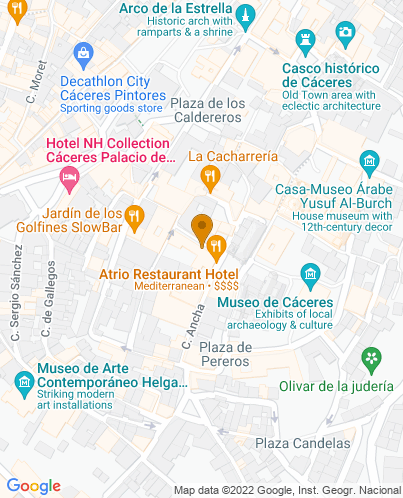 Cáceres is a pretty little city which was a particularly impressive Old Town. Now listed as a World Heritage site, this maze of narrow streets winding between mansions, palaces and tiny plazas is unusual because its in three dimensions, weaving up and around the city's ancient stone walls. As you can imagine this organic creation has remained relatively unchanged since the 16th Century, and this is where you'll find some of the best places to stay in Cáceres.

As well as the charms of its Old Town, Cáceres is also known throughout Spain for its beautifully arcaded Plaza Mayor, or main square.

Its oldest treasures date from around 25BC, when this was already a thriving Roman centre, though near to Cáceres are the Maltravieso Caves, where you can see local art dating from the Paleolithic period. Conquered by the Arabs in the 8th Century - and you can see the Moorish influence in some of the city's architecture, Cáceres' next golden age was around the discovery of America, when many wealthy and influential Spanish families wanted to build their mansions and palaces in Extremadura, near the verdant fields and shipping ports.

As well as the rows of impressive cathedrals, churches, palaces, convents and municipal buildings, Cáceres also has a large number of museums for its size.

Cáceres is close enough to Madrid for a day trip - albeit it's a long drive, so it's really worth staying overnight and having the city to yourself and the locals once the day-trippers head home.

Still not sure which is the best place to stay in Cáceres for you?