Search the best hotels in Uruguay

Sandwiched between Brazil and Argentina, Uruguay might be easy to miss on a map, but if you want to visit a South American country that is relatively safe and stable, has an extremely rich art and design scene, but also an engrossing story and strong national culture — with colourful regional differences, and has an incredible coastline and a rugged interior well worthy of exploration, then Uruguay is perfect. Compared to Brazil and Argentina we don’t have a huge set of recommendations for the best places to stay in Uruguay, but the list is by no means short, with some great properties in the capital Montevideo, in Punta del Este, known and loved for its beaches, and in Colonia del Sacramento,

And that’s before you consider our recommendations for the best places to stay in Uruguay outside the main cities. And if you have time, we certainly recommend you go beyond Uruguay’s cities.

Some of our Uruguay Collections:

Don't forget that the best places to stay in Uruguay (especially those by the beach) will be very busy during peak holiday periods. So if you want to guarantee your room, you'll need to get organised and book well ahead.

The Best Places to Stay in Uruguay

For a short break

Some of Uruguay’s Most Romantic Hotels

See all » 7 hotels in José Ignacio

See all » 6 hotels in Montevideo

See all » 2 hotels in Carmelo

See all » 1 hotel in Garzon

See all » 7 hotels in José Ignacio

See all » 6 hotels in Montevideo

See all » 2 hotels in Carmelo

See all » 1 hotel in Garzon 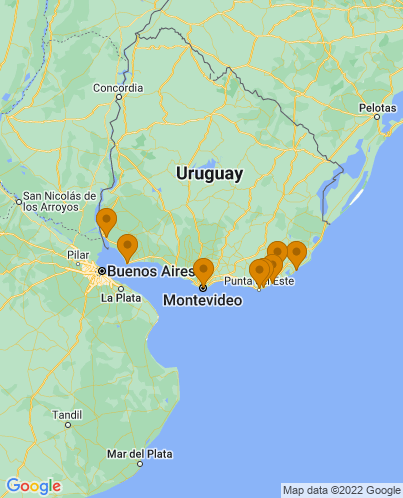