Search the best hotels in Vicenza 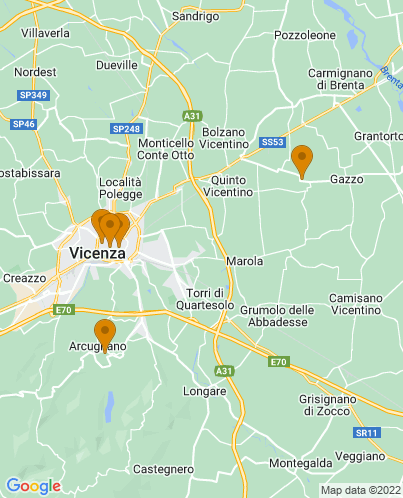 Vicenza is known to enjoy one of the highest standards of living in all of Italy. Steeped in history and teeming with culture, this vibrant town was designated a UNESCO World Heritage Site in 1994 but is still overshadowed by its more popular neighbour, Venice, making it the perfect holiday destination for a tourist hoping to soak in the "real Italy", unpolluted by mass tourism. Brimming full of art galleries, a grand mix of Baroque and Gothic architecture and delicious gelato shops, the best places to stay in Vicenza tend to be charming boutiques offering an authentic experience.

Vicenza is a truly ancient city. Sucked into the Roman Empire in 157 BCE, "Vincentia" as it was known was destroyed by the Huns in 889 CE and by the 15th-century, it was part of the Venetian empire. It was only during the 16th-century that its beauty truly came into fruition. The architect Palladio had an undying influence on the town, adorning it with the kind of marmoreal grandeur he saw in Rome as a student. From his lowly beginnings as a stone-cutter, he transformed Vicenza into what it is today: a living, breathing, open-air museum, seamlessly uniting sophisticated classical styles with rustic charm.

While strolling through the pedestrianised historic centre, you would be hard-pressed to find a building that wasn't touched by the restless hands of Palladio. The Teatro Olimpico is one such example; built-in 1580 (and designed by the great man himself) it is the oldest covered theatre in existence - the statues and seating remain unchanged since the days of Palladio. The gothic cathedral nearby, started in 1482, was completed by Palladio and its great dome was designed by him in 1566.

While in the centre, be sure to check out the Palazzo Chiericati, an art gallery featuring works by Bassanno and his two sons. Be sure to purchase a "biglietto unico" card for 8 euros, because it lets you into the vast majority of museums and major sights. Afterwards, consider buying ice cream from one of the many gelato shops tucked away in the side streets. Tutto Gelato is a good call, being the place where locals buy their gelato.

As you venture south towards the outskirts of town, you reach the Monte Berico viewing point - one of the best viewing spots in the town - a very romantic spot, particularly at sunset. Nearby is the Villa Valmarana, the architectural pride and joy of Vicenza. Known as "Ai Nani" by locals due to the presence of sculpted dwarves lining the walls, it has some beautiful frescoes depicting scenes from both the Iliad and the Aeniad. While in the vicinity, be sure to check out Villa Capra, a temple-like structure, with sloping lawns and breathtaking panoramic views.

It may not be as popular as its famous neighbour, however, during the holiday's hotels can get booked up so in order to ensure a room at one of the best places to stay in Vicenza we recommend planning your trip well in advance.

The best places to stay in Vicenza