Search the best hotels in Sofia 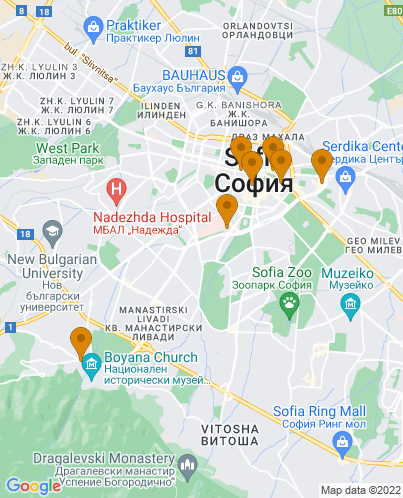 A couple of years ago Sofia's headline was something along the lines of 'Cheapest European Capital', but as well as moving out from behind the Iron Curtain, Sofia has moved on from low prices being its sole selling point. This is Bulgaria's biggest city, but it is still delightfully compact for walking around and full of new trendy developments and fascinating museums and galleries. The hotel scene has also taken massive strides forwards with a good range of converted historical buildings and luxury options. For the best places to stay in Sofia we recommend booking one of the city centre options.

An unmissable sight of Sofia is the Aleksander Nevski church. You won't miss it because it's a vast, awe-inspiring piece of neo-Byzantine architecture decorated with golden domes and ornate mosaics. But you also won't want to miss it! Commemorating the 200,000 Russian soldiers who died in Bulgaria's war of independence against the Turks, it houses most of Bulgaria's religious treasures. It's also worth dropping in on the Royal Palace, the Archaeological Museum, the Sveta Nedelya Cathedral, the Turkish Baths, and taking a trip up to the Vitosha Nature Park. If this looks like it'll take you more than a few days, you'd be right, and that's before you pack in Sofia's lively eating, drinking and dancing scenes.

Sofia hasn't entirely shed its Soviet-era uniform, and the remnants of this period, the neo-classical Stalinist civic buildings, Red Army monuments and concrete tower blocks add to the exciting east-meets-west feeling. The pre-Soviet architecture tells many tales of its own, there are wonderfully ornate onion-domed churches around the corner from a mosque built by the Ottomans and a graceful tree-lined, balconied building built by a 19th Century Viennese architect.

The city is ringed dramatically by the Balkan Mountains to the north and the Vitosha Mountains to the south. Maybe it's this proximity to the mountains, but Sofia has plenty of green space as well, and in season people can drive up to the ski slopes of Mt. Vitosha for the day. During the summer months this is a popular destination, so in order to bag a room at one of the best places to stay in Sofia we recommend booking well in advance.

The best places to stay in Sofia