Search the best hotels in Dawson 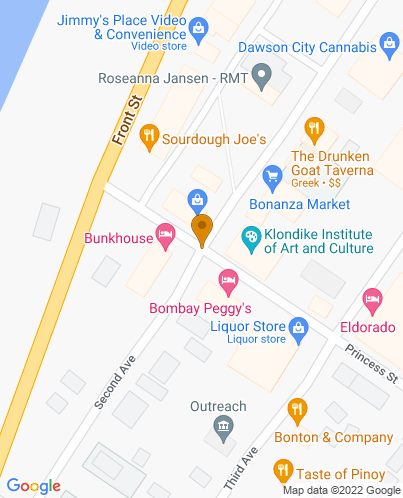 Dawson, or Dawson City as it was formerly known, was capital of the Yukon until 1952 and most famous as the centre of the Klondike gold rush in the late nineteenth century. The best places to stay in Dawson take you back in time to relive the madness of those few years.

Historically the town was a harvest area for the Tr’ondek Hwech’in people. They had a fishing camp at the meeting of the Klondike and Yukon rivers, which in summer was a gathering spot and a base for moose hunting. The town became gradually established through the fur trade but exploded in 1896-1899 with the discovery of gold in ‘Bonanza Creek’. The town’s population leapt from 1,000 to 40,000 in months as a crowd of hopefuls from all corners of the earth descended with the dreams of getting rich quick. By 1899 it was all over. The easy gold had been found and extracted and the vast majority went home disappointed. The population reverted to 8,000 - gold mining continued but on a smaller scale. A decade later dredge mining began on an industrial scale, and the landscape bears witness to this with the interminable tailing mounds of dumped gravel. Dredge number four is a monument and National Historic Site of Canada.

In the years following the Second World War, Dawson was bypassed by the Alaska Highway, the population fell below 1,000 and the ‘city’ was replaced as capital of the Yukon by Whitehorse. Dawson has, however, more recently experienced something of a revival through both tourism and ‘placer’ mining of gold.

Dawson may well still have the look of a Wild West town, but there's a lot more to it than that! There's a thriving arts and culture scene, a great range of bars and restaurants, and during the summer months a weekly farmers' market and Arts and Craft Fair. Plus there's a huge range of outdoor activities, from hiking and biking to dog sledding or scenic trips down the Yukon river.....and don't forget to climb (or drive) to the top of the Midnight Dome - this will reward you with a view to remember!

Our pick of the best places to stay in Dawson is perfectly placed in the centre of town and a great base from which to explore the wider area.

For the Spirit of the Klondike