Search the best hotels in Elba 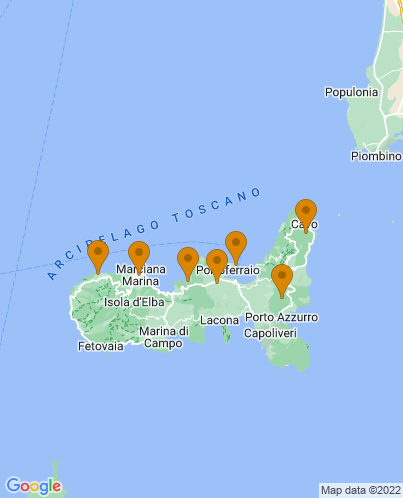 Many visitors to Elba stick to their beachside town. But the interior is also worth exploring, on foot or by car, as there are lots of little villages, ancient forts and old churches, both ruined and still functioning, to visit. Elba has accommodation for every budget, from camping grounds to luxury resorts. It's worth looking beyond the capital though, as some of the best places to stay on Elba are outside Portoferraio.

Elba gets a bad rap because Napoleon was unhappy about being exiled here. But me thinks the general doth protest too much - he was exiled to a Tuscan paradise of sunshine, warm, clear seas, wild flower meadows plus fascinating old churches and historic sights.

Napoleon's nine months on Elba was lived far from the life of a prisoner - though he did start off his exile in the Torre del Martello, a red coloured tower which remained a prison until 1877. However, he quickly became the Emperor of the island, and moved to the Palazzo dei Mulini - now a museum. And in the summer, when it was hot in Portoferraio, he moved to a villa in the hills, now the Museo Villa Napolenica di San Martino.

It was Napoleon who decided Portoferraio would be the island's capital, and he who drew many of Europe's great men to this city. Born as a fortified port, Portoferraio is protected by historic walls, built in the 15th Century and designed to protect it from pirates. Portoferraio's old town is a lovely web of narrow streets heading from the bay to the twin forts on the hill, pinkish Forte Stella and Forte Falcone.

Elba has 150 beaches whilst the interior is green all year round, and especially beautiful in spring when it is carpeted with wildflowers. There are plenty of scenic drives on spaghetti-like road systems winding all over the hills - with views that spread from the bright blue sea to the pretty, Tuscan-style hilltop towns. And the surrounding blue seas are rich with marine life. The whole island is within the Parco Nazionale del l'Arcipelago Toscana, so it's protected from development.

Elba isn't just naturally beautiful, it's also rich in minerals - which is why it's been so hotly contested through the ages. The Romans holidayed here and quarried materials for their columns, and the Etruscans have also left fascinating traces of their time here. As well as the sights and ruins themselves there are numerous museums displaying ancient treasures belonging to the island's former inhabitants.

With such history and beautiful sites many of the best places to stay in Elba are snapped up quickly so be sure to book early.

If you think you'd be best served by a self-catering option then browse through the wide variety available online with our partner Booking.com.