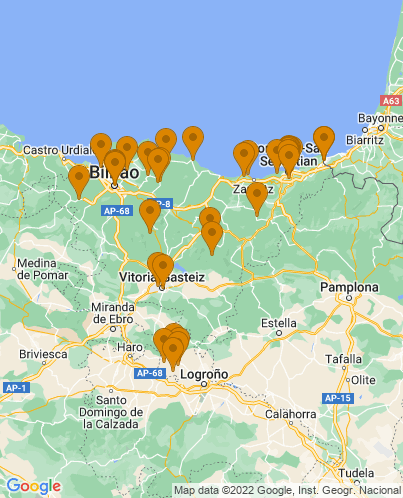 The Basque Country is different. The landscape is more dramatic than the rest of Spain: the topography more varied and the coastline up against the Atlantic is rocky in a spectacular kind of way. Its cuisine is also different. And well known by even those with only a passing interest in food. And of course the culture is different. Which comes, in part from the region traditionally having its own language. If you’re just dipping your toe into this region then the best places to stay in the Basque Country will probably be in Bilbao or San Sebastián, both known for their food and strong Basque culture. But if you’re really exploring the region - and it’s certainly a rewarding place for the curious to travel through - then you’ll find many of our Guru’s recommendations for the best places to stay in the Basque country in lovely rural spots or small towns. There are some beautiful converted farmhouses and castles in their list, and some great value offerings as well.

Places not to miss:

You might not have realised that Vitoria-Gasteiz is the capital of the Basque Country. It's a surprisingly modest city, as far as the outside world is concerned, but one with a truly wonderful old centre, the kind of pintxo (Basque tapas) bars and restaurants you'd expect from the capital of such a food-loving region, and an art gallery to rival Bilbao's. One of the charms of Vitoria-Gasteiz's old town is the fact that the medieval names of the narrow streets have been kept - and they pretty much describe the business which went on along each of them. The old town is where you'll find the famous Catedral de Santa Maria, which sticks out of the skyline like the highlight it is.

Most outsiders think Bilbao is the region’s capital, the 'urban phoenix' - a colourful phrase reflecting the city's rise from a decaying industrial city to cultural powerhouse - known for food, football and the Guggenheim. Bilbao isn't the prettiest of cities, but since the opening of the Guggenheim in 1997 several other architectural treasures have sprung up and lent the whole city a much more dramatic look. At the other end of the architectural scale is the Basilica de Begona - which sits like Sacre Coeur on a hill, the Catedral de Santiago, and the neatness of the Parque de Dona Casilda.

San Sebastián is the Basque Country’s other main city, and one blessed with two of the few really nice city beaches in Europe - Playa de la Concha, right near some of the city's major historical buildings, and Playa de Gros, where there's also great surfing. It also has the wonderful culinary culture of the Basque country, a lively and beautiful old town, the Parte Vieja, and plenty of interesting local museums, markets and charming old buildings.

Aside from the cities, Hondarribia on the French border is another great gastronomic centre, Getaria is known for its seafood, Guernica is a famous and culturally significant stop, Alava is known for its wines, grown in the rolling foothills of the Pyrenees, and Eleciego, especially is worth a visit, for Frank Gehry’s amazing architectural tribute to wine. And then of course there are the rocky peaks and lush valleys…

Our guide to the best places to stay in the Basque Country has something for all tastes and budgets whether you're looking for a cheap and cheerful B&B or no-holds-barred, five star luxury.

The best places to stay in the Basque Country

On the Basque Country’s Coastline

Spain's northern coastline is a stunning sight, lashed by the Atlantic and full of pretty seaside towns and villages. Our favourite places to stay are ideal for those who like to be close to the sea.

For a Rustic Escape

There is so much more to the region than its major cities. Read on for our selection of the best truly rural places to stay in Spain's Basque Country.

This region is a mecca for foodies and it's fair to say that wherever you stay will be a good choice. But here's our pick of the best places to stay in Basque Country, Spain that have excellent restaurants on site.

You don't need deep pockets to enjoy a holiday here. We've found some of the best places to stay in Basque Country, Spain that you can book for as little as €70 per night.

Spain's Basque Country is a wonderful family friendly destination, there's simply so much to see and do for all ages from culture and food in the main citiies to surfing on the coast or hiking or horse-riding for outdoorsy types.

Still not sure which is the best place to stay in the Basque Country for you?