Search the best hotels in Castile-León 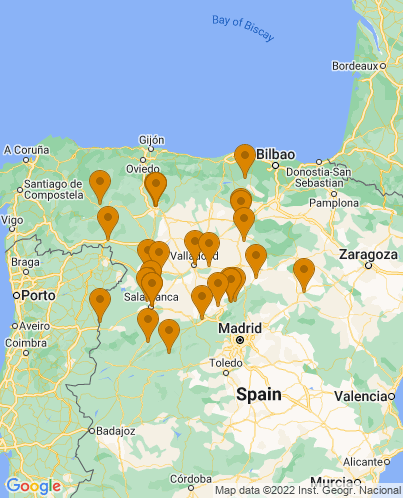 Castile-León, or Castilla y León, is a region of hilltop castle fortresses, grand medieval cities with monumental churches, lush vineyards and vast open plains. The food is exceptional, even for Spain and the history is a tangled web of drama. Our Guru’s recommendations for the best places to stay in Castile-León include hotels converted from historic fortresses and monasteries, isolated pousadas and luxurious, modern hotels surrounded by their own vineyards.

This is one of the largest regions of Spain and there’s plenty of variety and so much to do. It’s also one of the least travelled, but most magical. This is old Spain, and once you start exploring you might find that you’ll need to stay in two or three hotels on our Guru’s list of the best places to stay in Castile-León before you’ve scratched the surface of this region.

One of the main reasons people travel to this region is to see the beautiful, medieval towns Castile-León is littered with. Many them make great bases, but the sizes vary a lot. Our Guru’s have recommendation for where to stay in many of them, but they also recommend a number of properties more off the beaten track and surrounded by vineyards and beautiful countryside.

Salamanca is one of the largest, and most famous centres in the region, with its beautiful architecture inspired by the warm, almost glowing, sandstone quarried just outside of town. Salamanca's beating heart, the huge Plaza Mayor, both the old and new cathedrals, the wonderful 15th Century House of Shells, decorated with 350 sandstone shells, and many of the university buildings are the highlights.

Not quite as impressive as Salamanca, but a wonderful encore, Zamora is referred to in many places as a Romanesque Museum because of its twenty four 12th and 13th century churches, all arranged, with rather monumental effect, in the casco historico, or old town.

Burgos is best known for its amazing Gothic cathedral, which looms over the rest of the beautiful, medieval Old Town like a fancy jewel. This was once a key stop on the Camino de Santiago pilgrimage, but it's worth more than just a 'pop in', this is a great city for foodies and rife with interesting buildings.

Leon is another important post on the Camino de Santiago, so also boasts an impressive cathedral, plus some notable architecture and a buzzing lively atmosphere due to its large student population

Then there’s peaceful Soria, capital of the Soria province of the Castile-Leon region, but its backwater charm, on the picturesque Rio Duero, is one of the reasons it's such a great place to hideaway. And amazing Ávila, enclosed by monumental city walls, complete with eight huge gates, 88 watchtowers and around two and a half thousand turrets. It looks like the setting for a fairytale, and the old fashioned, quite religious, atmosphere and mountainous backdrop only strengthens the magical feeling.

Valladolid is another of the region's largest towns, and viewed by many as the gateway to Northern Spain, whilst at the other end of the region there's UNESCO Heritage listed Segovia, just 50 miles from Madrid.

Use our guide to the best places to stay in Castile-Leon and start to plan your trip to this stunning region.

The best places to stay in Castile-León

The Most Romantic Places to Stay in Castile-León

Still not sure which is the best place to stay in Castile-León for you?