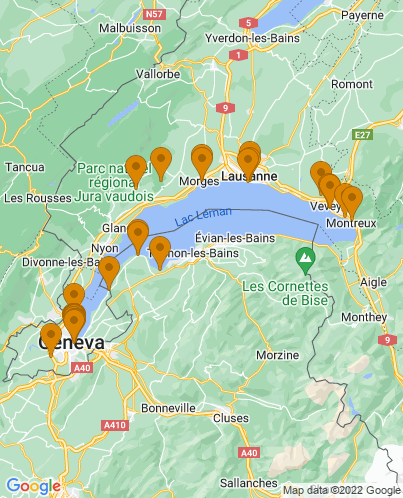 Europe's largest lake, separating some of Switzerland and France, this glittering stretch of water is much more than just an impressive statistic and political boundary. It's spectacularly beautiful, with views of the alps on one side, charming rows of lush vineyards to another, and pretty châteaux and smaller towns dotted all the way around it. These offer wonderful peace and tranquility, and one of them is where milk chocolate was invented, but if you want a richer cultural experience some of the best places to stay on Lake Geneva are the lake's main cities, Geneva and Lausanne. All of which means that there's a wide range of properties to choose from too: charming rural B&Bs, excellent restaraunts with rooms and top notch luxury hotels to satifsy even the pickiest of customers.

We’ve started our recommendations with a quick review of the different cities, towns and villages we recommend, but if you’re only interested in hotels they’re just below.

Some of our Lake Geneva Collections:

Where to Stay - which town?

Most of the cities and towns on the lake are served by boats allowing you an extra scenic exploration route. Lake Geneva is also a beautiful spot for a road trip - you might even want to consider choosing two or three of the best places to stay on Lake Geneva and then hopping between them.

The Best Places to Stay on Lake Geneva

Still not sure which is the best place to stay on Lake Geneva?