Search the best hotels in Birmingham 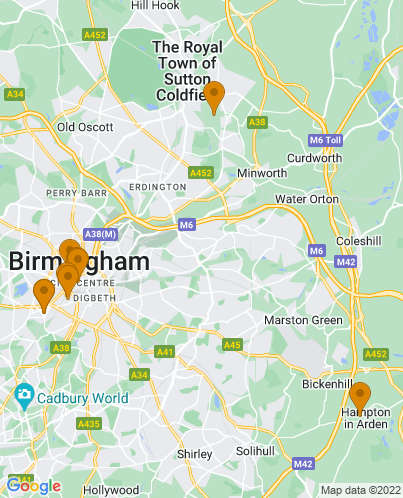 Birmingham, with a population of 1.1 million, is Britain’s second largest city after London. Originally a market town it grew exponentially in the wake of the industrial revolution to become ‘the workshop of the world’. Consequently it has a diverse economic and cultural feel, waves of commonwealth immigration have resulted in a rich ethnic mix. During the last war Birmingham was a major target and thus there has been much rebuilding in the intervening years - and some serious regeneration recently. The best places to stay in Birmingham give the visitor prime position to discover the delights of this most interesting of modern cities.

Post war reconstruction led to the city centre becoming something of a concrete jungle and Birmingham was still suffering from the decline of its traditional manufacturing and heavy industries. This has now all changed. The economy is predominantly service based and the city is regarded globally as a major transport, retail, conference and events hub. It boasts six universities and five Michelin starred restaurants. The Orchestra, Ballet, Repertory theatre and (new) Library enjoy international reputations. There is also a thriving arts scene.

There are endless avenues of interest in the re-emergent Birmingham, from its state of the art new library and the stunning New Street station to the old Symphony Hall. One of the finest collections of Pre Raphaelite art is to be found in one of the many public galleries. Birmingham has come a long way from the old canals and the Grand Junction Railway Company!

Deservedly it is the fourth most visited city in the UK by foreign visitors, so if you want to make sure of a bed in one of the best places to stay in Birmingham, get organised and book well ahead.

For just outside the city