Search the best hotels in Londonderry 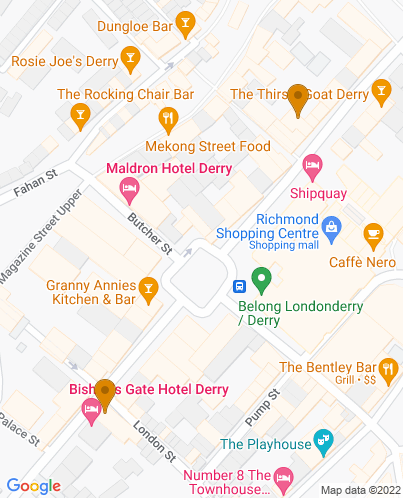 Londonderry - or Derry, depending on your views of Ireland's relationship with the United Kingdom - is a picturesque and bustling city and the only fully walled city in all of Ireland. The site of the Battle of Bogside and Bloody Sunday, it stands at the border between Northern Ireland and the Republic and was a major battleground during The Troubles. Yet over the last two decades, it has undergone a metamorphosis into a vibrant cultural centre, with a rejuvenated waterfront and a burgeoning live music scene. Our collection of the best places to stay in Londonderry range from chic boutiques to romantic boltholes.

Londonderry was founded in 1613 by a group of London merchants, who subsequently erected the glorious St. Colomb's Cathedral in 1633. It is one of the oldest buildings in the city and has a spire that stands at 221ft high. Inside is a treasure trove of historical artefacts, particularly in the Chapter House Museum, and should not be missed. You should also take a guided tour of the old walls and learn about the Siege of Derry: standing at 20ft high, the walls are adorned with cannons, gates and battlements, and offer gorgeous views of the city and its surroundings.

It should come as no surprise that Londonderry was named the UK's Capital of Culture in 2013. The incredible depth and variety of its historical heritage are astounding, not to mention the blossoming music scene or spectacular array of contemporary art. Of course, this boom didn't happen overnight: the city has long been a bastion of creativity, with the tune Londonderry Air - the melody for O Danny Boy - hailing from these parts. Take a guided tour of the Bogside Murals, some of the most hauntingly beautiful and politically-charged street art in Europe, depicting the violence, stasis and oppression that defined The Troubles. In the Museum of Free Derry, you will be further immersed in this dark and valiant world, and also learn more about the struggle for a united Ireland.

Be sure to check out Guildhall, without a doubt the most architecturally-beautiful building in the city and where the council regularly meets. Its red sandstone exterior, stunning stained-glass windows and neo-Gothic facade are truly wonderful to behold. Consider meandering down to Craft Village, one of the coolest places to go in Londonderry, a reconstructed 18th-century street that teems with craft stalls, bookshops, boutiques selling knitwear and street-food.

To ensure a room at one of the best places to stay in Londonderry we recommend planning your trip well in advance.

The best places to stay in Londonderry