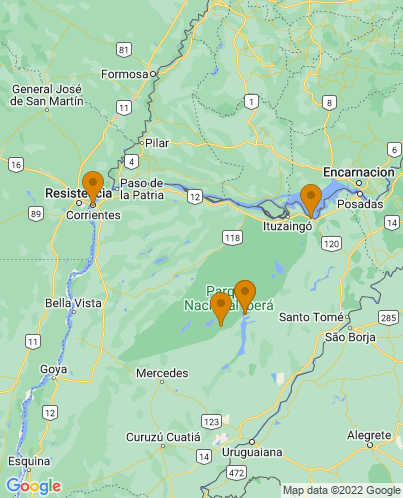 Corrientes Province lies in north eastern Argentina and borders Brazil, Uruguay and Paraguay. The best places to stay in Corrientes are rural hideaways - perfect bases for exploring this subtropical region of lagoons, lakes and swamps. But for those wanting a bit of nightlife and culture, Corrientes city is a good choice.

Originally a tribal area, Corrientes was founded and settled by the Spanish from 1588. The region flourished as a trade route and subsequently the northern part became home to various Jesuit missions whose history was depicted in the film "The Mission". The province has long been predominantly agricultural with tobacco still being a main staple.

The word ‘Corrientes’ means ‘current’ or ‘stream’ and herein lies the clue to the region’s main attractions; namely the park areas of the Ibera wetlands and the Mburucuya National Park. These two areas are vast tracts of wetland, lake, lagoon, marsh and swamp. Ibera is one of the most important freshwater reservoirs in South America and the second largest wetland in the world. These areas are home to an extremely diverse habitat of flora and fauna and are a naturalist's paradise.

Corrientes city is situated on the Parana river, and has some fine examples of colonial architecture - the San Francisco convent and May 25th Square should not be missed.

Whether you want to explore the National Parks or Jesuit ruins, or simply take a city stroll along the Parana river, our pick of the best places to stay in Corrientes Province offer a choice for all.

For Great value in town

For the Ibera wetlands