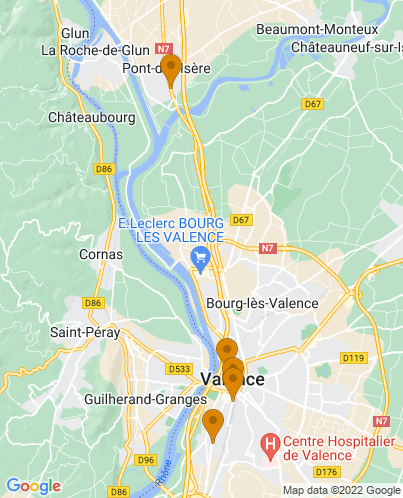 Valence lies on the left bank of the Rhone river in the Drome area of South-East France and is commonly known as the ‘Gateway to the South of France'. This is a lovely city filled with historical sites and pretty outdoor spaces. The hotels are equally as alluring with the best places to stay in Valence ranging from grand historical converted buildings to chic contemporary stays and, as this is an acclaimed gastronomic city, a few of our picks even boast Michelin starred dining.

The city’s history dates back to Roman times and there is much for the sightseer in terms of buildings and monuments. Probably the most significant sight is the Cathedral St. Apollinaire a beautiful eleventh-century building in Romanesque style. Nearby in ‘Vieux Valence’ there is the Maison des Tetes (so named due to all the heads sculpted on the facade) and the Maison Mauresque (a building celebrating the French love of Moorish architecture). The Musee d’Art et d’Archaeologie houses a fascinating collection of art from the sixteenth century onwards. There is also the bijou Italian theatre and an Armenian centre - celebrating the large contingent in the city.

There are many wide-open spaces. In the centre, Jouvet park is one of the prettiest in the region and has lovely views of the ruined Chateau de Crussol. The Champ de Mars has boulevards to stroll and the famous bandstand of Raymond Peynet. You can also stroll along the many canals or take advantage of Valence’s self-service ‘rent-a-bike’ scheme.

For gastronomes, Valence is justifiably proud of Anne-Sophie Pic, restauranteur and holder of three Michelin stars. Not to mention the two other Michelin starred establishments here!

Although the city is often used as a stopping off point on the way to or from the South of France, choose one of our picks of the best places to stay in Valence and you've got a great reason to linger for longer!

The Best Places to Stay in Valence