Search the best hotels in Dortmund 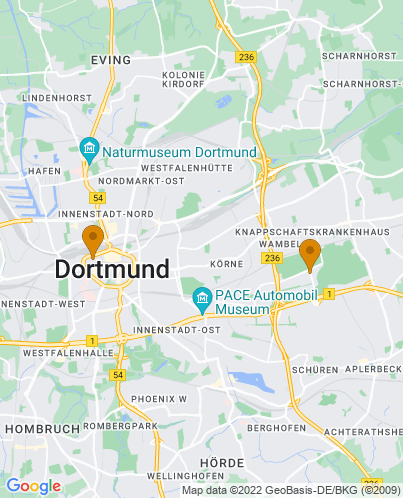 A city of art and industry, Dortmund lies at the southern end of the Dortmund-Ems canal. Boasting excellent museums, fascinating art galleries, beautiful public parks and the haunting remnants of Nazi Germany, it makes for a fascination destination for history lovers and those wishing to immerse themselves in German culture. Our collection of the best places to stay in Dortmund are ideally positioned for accessing all the city has to offer.

Dortmund has a long, rich history. First mentioned in 885, it became a Free Imperial City in 1220 and subsequently joined the Hanseatic Trade League, fast-becoming a booming trading centre in the Middle Ages. Following the Thirty Years War, it fell into quick decline but the 19th century saw a reversal of its fortunes, enshrining the city as a centre of heavy industry in the form of coal and iron ore mining; its canal underwent an expansion and it saw rapid levels of growth, before being brutally subjected to Allied bombing during WWII.

In the aftermath of WWII, many of its medieval churches were reconstructed, like the Marienkirche - originally built between the 11th and 14th centuries - an architectural marriage of Romanesque and Gothic styles. St. Reynold's Church is also a must-see: with its gorgeous Baroque spire, Romanesque nave and Gothic chancel, it is a delightful historical hodgepodge of different styles. In an hour of reflection, be sure to visit the Steinwache, a haunting reminder of the perils of Nazi ideology: a former Gestapo police station where thousands of political prisoners were interred, the cells beneath have graffiti on the walls from the prisoners themselves.

As for art, you are spoilt for choice. The Museum Ostwall should be high on anyone's priority list for sightseeing: featuring modern, abstract works from the likes of Picasso and Salvador Dali. The Museum fur Kunst und Kulturgeschichte, another great gallery, features classical works from the 18th to the 19th centuries. There is also an excellent Brewery Museum, detailing the laborious process of beer-making, and offers some splendid guided tours of the facilities. Afterwards, be sure to head out to one of the many beer gardens lining the city streets and sip on some local beer at the Alter Markt with a plate of Salzkuchen - a bagel coated with caraway seeds and lined with pork and onions, a local delicacy.

With so much on offer this is undeniably a popular spot so in order to ensure a room at one of the best places to stay in Dortmund we recommend planning your trip well in advance.

The best places to stay in Dortmund