Search the best hotels in Genoa 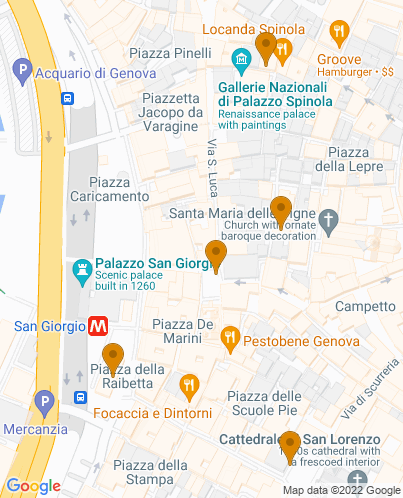 Genoa was once a maritime powerhouse, ruler of the Mediterranean during the 12th and 13th Centuries and birthplace of Christopher Columbus. It's still a great port, but great ports are places of busy industry, so Genoa isn't one of the most elegant of Italian cities. Some of the best places to stay in Genoa are also some of the most reasonable places to stay on the Italian Riviera.

What Genoa is is a vibrant, living place, ageing with style, with a gritty ancient maze of narrow streets at its heart, a reputation for excellent cuisine and some very well done regeneration work - including one of Europe's largest aquariums.

Genoa also makes an excellent base for exploring the whole region, including jewels like Portofino and the Cinque Terre.

Genoa's historic centre is one of the largest old towns in Europe, a sprawling maze made up of the caruggi, tiny streets and alleys which run all the way down to the old port. Behind these alleyways are the facades of grand old palaces and Mediterranean style houses with their red roofs. There are plenty of charming squares, overflowing with seating from cafes and bars, and tucked away in some of the quirky little alleys you'll find boutiques, galleries and restaurants.

Don't be too worried about getting around. Yes, this city has some steep sections, but it also has its own municipal lifts to help you get from one pitched street to another.

You'll also find the house where Christopher Columbus was born, the Lanterna, Europe's oldest lighthouse, and a number of palazzos, churches, piazzas, museums and art galleries. In 2004, Genoa was the European Capital of Culture, and this cultural and financial boost helped to polish up some of the existing attractions, and inject some new ones. This is when the aquarium and maritime museum were built and the port regeneration took place.

Genoa also has several of those impressive, striped Ligurian churches, including the Cattedrale di San Lorenzo, which was built to house the relics of John the Baptist.

The Italian Riviera is backed by mountains, giving it a microclimate protected from the northerly winds, so it's quite pleasant from late winter/early spring. If you're visiting over the summer, though, be sure to plan ahead if you want to grab a room in one of the best places to stay in Genoa, they sell out fast!