Search the best hotels in Pitlochry 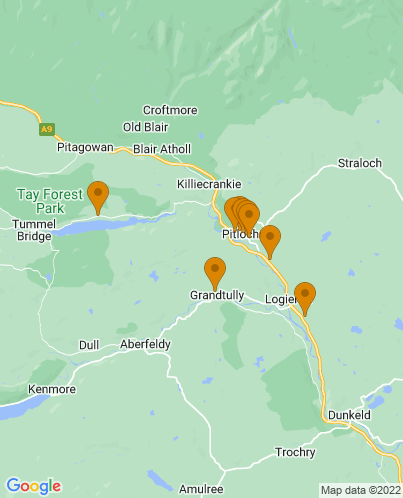 In 1845, Queen Victoria's physician praised the clean air of a small, stony-faced town nestled in the Highlands. He was referring to Pitlochry. Settled by the banks of the River Tummel and in the shadow of the mountains, Pitlochry is the perfect place for a romantic weekend away or a rural getaway. Whether you're tasting whiskey at a distillery, enjoying a play at the famous Festival Theatre or hiking across the untamed beauty of Rannoch Moor, you will find yourself lost in the tranquil arms of nature. Utterly romantic and oozing with magic, the best places to stay in Pitlochry range from beautifully renovated country homes to quaint inns.

Gaelic speakers native to Pitlochry call it "Pit Lochraidh", translated roughly as "cattle settlement of the Picts". Thus Pitlochry has roots that run deep into the Iron Age. About 1 mile south of the town is the Dunfallandy Stone, a Pictish cross slab, evidence of the town's long-established existence. However, it took the establishment of the railway in 1863 to truly put Pitlochry on the tourist map. The town's newly-captured fame is perhaps overshadowed by Blair Atholl, lying nearby, the ancient home of the Dukes of Atholl, and the home of Europe's only legal private army - the Atholl Highlanders.

The town itself is delightful to behold. The Scottish Baronial architecture, with its emphasis on conical roofs, corbelled turrets and crow-stepped gables, is popular with visitors and though, by all means a Victorian style, it has its roots in the 16th-century. As such, Pitlochry has a remarkably archaic feel to it. You feel as if you've plummeted into a totally different world. The Atholl Palace Hotel is one such example: in spite of being built in the 19th-century, visitors remark how positvely "medieval" it looks, seemingly pulled out of a Grimm's Fairytale.

There are countless independent stores: bakers, tourist shops, boutiques and high-end retailers, but the real charm of Pitlochry lies in its abundance of high-quality booze! There are two notable distillers in the town - the Blair Atholl Distillery founded in 1798, and the Edradour - both of which have a visitors centre and offer guided tours. If you prefer hops to grain then have no fear, there is a decent beer brewer on the outskirts of town, the Moulin Hotel.

The countryside surrounding the town is idyllic: the lush hilly landscape looks like a ruffled green carpet and the looming mountains in the backdrop of Pitlochry like Ben Vrackie are fantastic hiking spots - challenging yet deeply rewarding. For a day-trip, consider hiking Ben Vrackie - standing at some 2759 feet - via the village of Moulin. For something more serene and infinitely more challenging, attempt to trek across Rannoch Moor, easily one of Scotland's most unique and unspoilt landscapes and just a few train stations away. The Cairngorms, Scotland's most barren and unpolluted region, is nearby and ideal for a hiking holiday.

During the summer months the best places to stay in Pitlochry can get booked up fast so in order to ensure a room we recommend planning your trip in advance.

The best places to stay in Pitlochry