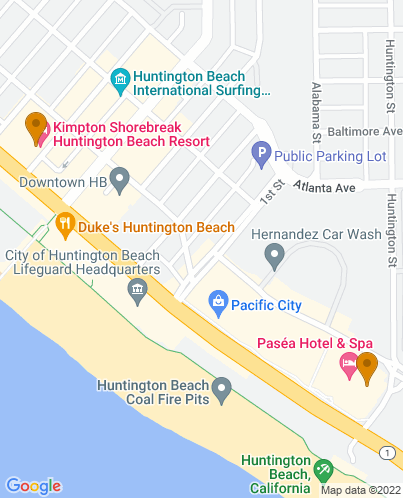 Huntington Beach is a seriously surfy destination. Lots of Southern California thinks of itself as laid back and surf-happy, but Huntington Beach is the real thing: surf shops galore, hip cafes and juice bars, beach party bonfires on the sand, a surfing museum, and consistently excellent surfing conditions. It’s also an incredibly beach-y destination, with a long, long (15.3kms) seafront lined with gorgeous hotels, bars and restaurants, and naturally our picks for the best places to stay in Huntington Beach are right along the beach.

Huntington Beach has never been glitzy, but it’s always been properly cool, and these days, the surf fashions you see here will be emulated across the world. Huntington Beach has been made over a couple of times, and, as well as being a much larger city, it’s also now got a colourful, and expansive, shopping and restaurant district around Main Street, and several huge malls.

You can’t build against Huntington Beach without a vote, so it’s mostly low rise, with a large, flat marshy wetland at one end of the beach, and several state parks, so despite being a city, there’s plenty of open space and wilderness too.

Our pick of the best places to stay in Huntington Beach are extremely popular beachside beauties. So do yourself a favour and book well ahead to avoid disappointment.

The Best Places to Stay in Huntington Beach

For a chic central stay