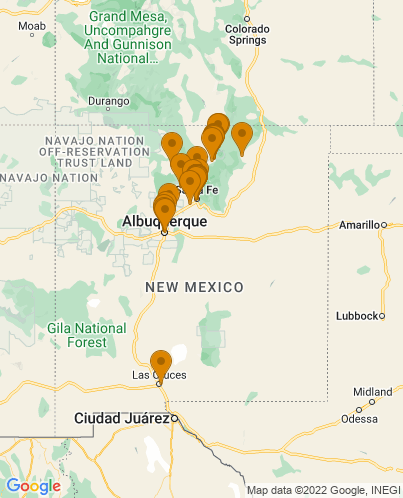 With its deserts, canyons, big skies and traditional adobe buildings, New Mexico, deep in the south-west, can feel very different to the rest of the United States. Together with its attractive climate - and summers can be very hot - lack of crowds and friendly relaxed cities, it's not surprising that it has earned the name 'The Land of Enchantment'. When selecting our best places to stay in New Mexico, we've looked for hotels that will give you an authentic taste of this very individual state.

Outdoors-lovers will head to the southern regions. Here you can go hiking or climbing amongst the Organ Mountains, which rise to 9000 feet and are dotted with spectacular waterfalls and volcanoes. They lie to the east of the Rio Grande, famed for its hot springs and modern spas. Here you'll also find the Gila National Forest, a huge wilderness criss-crossed with hiking and cycling trails, and the alien-looking White Sands National Monument. The latter look uncannily like a mass of sand dunes but are, in fact, vast outcrops of gypsum.

Close to the Rio Grande is where the world's first commercial space flight is due to launch. Until then, you can visit the Very Large Array, a mass of radio telescopes constantly searching the universe for alien life. Those interested in extraterrestrials must visit the town of Roswell and you'll discover, amongst other kooky things, a UFO Museum; it was near here that a UFO supposedly landed in 1947. Silver City is another attractive city with a friendly, hip atmosphere and famed for its brewpubs and summer music festivals.

Other cities include Albuquerque with its Indian Pueblo Cultural Centre, and, of course, the capital Santa Fé nestling at the foot of the Sangre de Cristo Mountains. At 7000 feet, it's the country's highest state capital. Highlights include the traditional adobe buildings - some dating back to the 17th century - Georgia O'Keeffe art museum, and the central Plaza with its food vendors, street musicians and Pueblo Indians selling jewellery and pottery. The city will intoxicate with its laidback atmosphere, mix of cultures and friendliness. Use our guide to the best places to stay in New Mexico to plan a trip around this oft-overlooked state.

The best hotels in New Mexico for authentic design

Still not sure where to book? For more choices, browse our list of the best places to stay in New Mexico or contact one of our friendly gurus for advice.