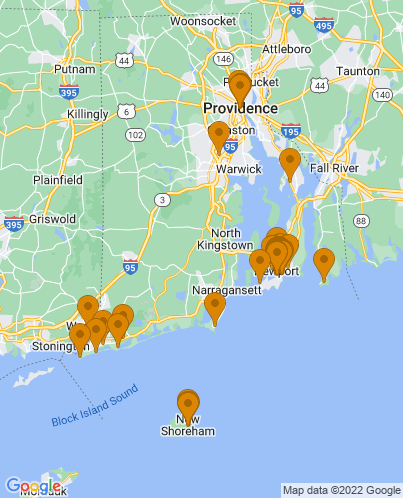 Rhode Island is the smallest American state - you can drive through it in about 45 minutes - but it’s got miles and miles of gorgeous coastline which make it a very appealing destination. Most of the best places to stay in Rhode Island centre in and around the cities of Newport and Providence, where there's a wide range of chic boutiques and elegant historical hotels. However, if the aim is to simply relax, choose one of our recommendations outside the cities, for a luxurious coastal stay.

Providence is Rhode island’s capital, a picturesque city rich in museums and galleries, and art and antique shops in wonderful old neighbourhoods. Unless you're only looking for the beach or the water, then it's worth at least passing through charming Providence. It’s also great for foodies and anyone who enjoys treating themselves to the finer things.

Newport is the state's other main city and is known both for its history and wonderful architecture. Some of the architecture is colonial and dates from the town’s founding. There are Tudor style mansions, French chateaux, Italian palaces and all sorts of castles and manors, built as summer houses by the rich and famous. One of the best ways to see the highlights of Newport is to take the ‘Famous Cliff walk’, a five and a half kilometre stroll along the clifftops with beautiful ocean vistas one side and views of some of the most extravagant mansions on the other.

Charleston, on the coast, is a great spot for a quiet, civilised beach break or family holiday, East Bay is where you go to learn about the earliest American settlers - with its whaling history and Bristol’s slave trade connections, or you might like to see Conanicut Island, another historic spot known for its Quaker farmers and the pirate, Captain Kidd.

Whether you're just passing through on a New England tour, or here for a longer stay, our selection of the best places to stay in Rhode Island has something for everyone: from great value city spots to all out luxury on the coast.

The Best places to stay in Rhode Island