Search the best hotels in Battambang 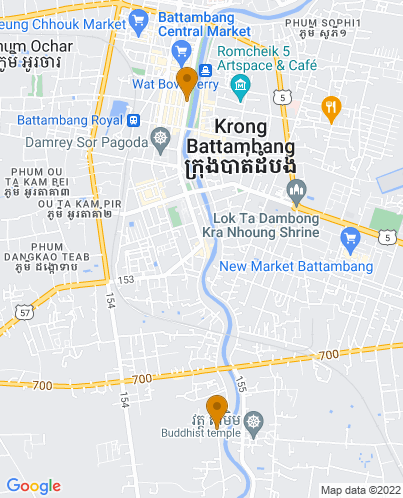 Battambang is a gracefully deteriorating colonial charmer of a city in a beautiful riverside setting. This is Cambodia’s second largest city, but it doesn’t feel that big. It’s friendly, with lots of lovely little cafes and relaxed streets and boulevards. Some of the best places to stay in Battambang have been converted from the colonial architecture that makes this city so unique. But if you’re just here for the food and the nearby ancient temples, then our Gurus list of the best places to stay in Battambang has something for you too.

For many people the main reason to visit Battambang is to take one of the world’s great river trips, up the river to Siem Reap and Angkor Wat. The boat leaves at 7am every day and takes between four and 12 hours, depending on the time of year and the height of the river.

Battambang’s heritage as a colonial city can be seen in its layout, as well as its architecture, and it’s quite easy to get around on foot. As you’re wandering around you’ll notice statues everywhere. You’ll see many animals, mythical and rea,l and gods and deities, but the most famous of them is probably the statue of an ancient Khmer King holding a stick, which can be found on the main road to Phnom Penh.

Some of the finest examples of the French colonial architecture can be found along the riverside, by Psar Nat, and the central market is an amazing Art Deco building. As are the swimming pool and the station.

As well as the architecture, Battambang has a museum and several interesting temples. And it’s close to Wat Banan, which is something of a mini-Ankor Wat, and the ‘Killing Caves’ of the Khmer Rouge inside a hill at Phnom Sampeu. This limestone outcrop is also known for its hundreds of thousands of bats, which pour out of its cliff face every evening. And of course for the human bones which are now something of a memorial. There’s also several beautiful Buddhist statues and a golden stupa on the summit.

Battambang is also known for being the home of Cambodia’s best-known circus, the Phare Ponleu Selpak.

Our pick of the best places to stay in Battambang is a centrally located colonial villa, which certainly won't break the bank.

The Bes Places to Stay in Battambang