Search the best hotels in Rudesheim 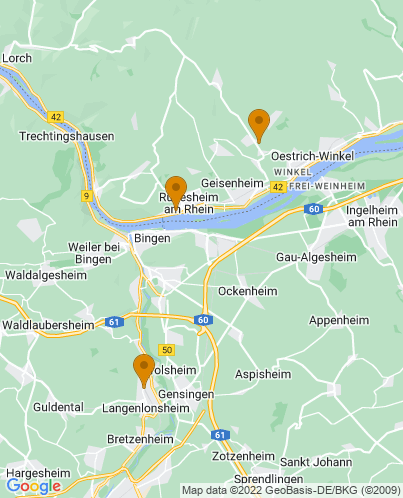 At the foot of the Taunus Mountains and overlooking the Rhine stands the picturesque medieval town of Rudesheim. Surrounded by sweeping vineyards and lush green valleys, this charming town is the ideal place for a romantic weekend away: stroll idly down the cobbled street of Drosselgasse, taste local wine or spot eagles and falcons in the mountains. The best places to stay in Rudesheim tend to be just outside the town itself in the beautiful surrounding countryside.

Nestling quietly by the Rhine river, Rudesheim has been a prolific wine-producing region for over one thousand years. Once inhabited by the Celts, it was later annexed by the Romans in the 1st century CE before being overrun by the Germanic tribes of the Alemans and Franks. Unlike other towns in the region, it flourished in the medieval era, unspoilt by the conflicts that so marred the era.

The Drosselgasse, a delightful cobbled street lined by old timbered houses that crawl with vines, was where Rhine boatmen found food and lodging in the 15th century. An utterly enchanting place, it looks like it had been pulled out of a children's fairy tale book, and is an incredibly popular tourist attraction, where people from all over the world come to visit the charming boutiques, gourmet restaurants and old-fashioned taverns.

Overlooking the Rhine Valley in a wooded park is the Niederwald Monument, built to commemorate the unification of Germany in the 19th century. The park itself is stunning, but the real charm lies in the unbelievable panoramic views you get of the Rhine, the valley, the vineyards and the town itself. If you're a wine-lover, this is certainly the place for you. The Rheingau Wine Museum, set in Bromserburg Castle - an 11th century architectural wonder - shows the history of wine-making in the region.

Take some time out to take the cable car up to the Germania monument, where you can enjoy breathtaking views of the surrounding landscape. Also consider heading to the Adlerwarte Niederwald observatory, which teems with eagles, falcons, owls and vultures. For an afternoon trip, be sure to do a castle cruise of the Rhine.

Unsurprisingly this is a popular destinationg, especially during the summer months, so in order to ensure a room at one of the best places to stay in Rudesheim we recommend booking well in advance.

The best places to stay in Rudesheim