Search the best hotels in Beirut 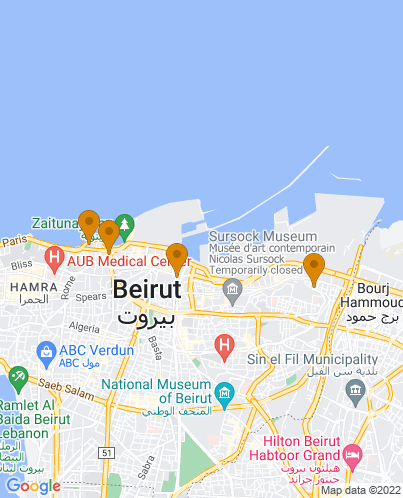 After decades of civil war and instability, Beirut is flourishing. Once referred to as "the Paris of the Middle East", it is quickly reclaiming its status as a fashionable, friendly, vibrant and culturally-dense city. With ancient temples straddling the feet of skyscrapers, crowded and chaotic streets lined with chic boutiques and cosy sidewalk cafes, a glittering Provencal-esque coastline, an infamously wild nightlife and a wealth of historical museums and art galleries, it is a fascinating city to explore. Our collection of the best places to stay in Beirut range from cosy boutiques to sophisticated city stays.

Beirut is steeped in layer upon layer of history. Demonstrative of this lies in how the Lebanese identify themselves: many will deny that they are Arabs and will tell you that they are the descendants of the Phoenicians, a people who settled on occupied areas of the Mediterranean - from Spain to the Middle East - in the ancient world and cities like Tyre, Sidon and Byblos were also settled by the Phoenicians. Nearby Byblos has been inhabited for some 7000 years and is effectively an open-air museum full of Roman columns and 12th-century Crusader castles.

Beirut is much the same, despite suffering damage from decades-long civil strife. Indeed, it is a testament to Lebanon that so much of their history remains intact. Take some time to walk the Beirut Heritage Trail, nearly two miles of Byzantine mosaics, Roman baths, archaic mosques, antiquated underground streets and old cathedrals. Beirut has some fascinating museums to feast-your-eyes upon, particularly the Beirut National Museum, which charts Lebanon's tale from its prehistoric origins through to the Arab conquest, displaying a fine range of ancient artefacts. Its art scene is also incredible with a burgeoning scene of local artists: the Sursock Museum is a great place to start, but be sure to check out the smaller galleries, like that of Marfa' and Sfeir-Semler.

Reclaiming its status as "the Paris of the Middle East" takes some work, and the recent restoration of the downtown areas and the newly refurbished waterfront speaks volumes, giving the seaside promenades an almost Miami-style feel to it. Older neighbourhoods like that of Mar Mikhael and Badaro are lined with charming boutiques and cafes and the architecture is a pleasant mix of French colonial and Arab styles. This curious dance between European and Arab styles is symbolic for the city-at-large. Many people are trilingual and you can hear French, English and Lebanese spoken within the same seamless breath as you stroll through the crowded streets. It is no wonder that Lebanon is also the most religiously diverse nation in the Middle East, and Beirut is a city where church bells and Muslim prayer calls blend into one.

You can't talk about Beirut without mentioning its nightlife. Unlike many other nations in the Middle East, alcohol is not banned so whether you're going to fancy bars where jazz plays or underground raves, you will be dancing until dawn. Your experience will be most helped by the fact that Beirut produces some of the world's best rose wine. To cure your hangover, forget bacon sarnies - Beirut is the spiritual home of hummus, fattoush and falafel - which you can find in droves.

To start planning your trip to this vibrant city browse through our selection of the best places to stay in Beirut.

The best places to stay in Beirut