Search the best hotels in Russia

Russia's vast size, the enormous differences in living standards of its people, and its tumultuous history make it a mystifying place for outsiders. However much you've read up on the country, as a traveller you're still probably going to be surprised by what you find. And whilst most people imagine that the best places to stay in Russia to experience all of this are Moscow and St Petersburg, there is plenty to explore beyond these headline destinations. However, if you want to see grand palaces, gloriously colourful onion-domed churches, and historic treasures beyond your wildest dreams, then Moscow and St. Petersburg are the Russia you’ll want to see.

Moscow is rife with the remnants of Communism, but it's also littered with wonderfully ornate churches and brightly coloured palaces. And it hasn’t just embraced Capitalism, it’s capitalised itself into one of the world’s richest cities in the space of a few decades. Moscow has the most billionaires, it’s where you can buy the world’s most expensive cup of coffee and the most popular nightclub is called ‘The Most’.

The red brick of the Kremlin and black cobbles of Red Square are steeped in history and many treasures built by the Tsars stand as a reminder of the pre-concrete-block era of architecture. But since then many of the less glamorous buildings - factories and warehouses - have been converted into more beautiful ones, now housing art galleries and museums and even clubs and restaurants.

St Petersburg is more European looking and feeling than Moscow, as well as being arguably more elegant. This was Russia’s imperial capital and it looks like a city built by Tsars. There are fabulous Baroque and Neoclassical palaces, Italianate mansions, beautiful plazas, and grand churches, all showcasing the sophistication and wealth of the Romanovs, and one of the world’s great collections: the treasures of the State Hermitage Museum.

Built, at much cost of life, on a swamp, St Petersburg is cut through with canals, has around 350 bridges, and plenty of opportunities to stroll along the water. Which is why it’s often referred to as the Venice of the north.

As well as the Hermitage, St Petersburg has the almost-as-vast Russian Museum and the contemporary Erarta Museum. Beautiful in summer with the endless hours of light, St Petersburg is also brilliant under the snow.

If you want to get a sense of the grande scale of the place - and Russia covers more than an eighth of the surface of the globe - then consider one of Russia’s epic train journeys.

Up to the Caucasus where you can trek or ski or climb, or to serene Lake Baikal, where you can sail or row. Or to the north, close to Scandinavia, where you’ll find Lake Ladoga and Lake Onega which hosts Kizhi island and a spectacular collection of traditional wooden churches.

Or travel to the far east and the volcanoes, geysers and bears of Kamchatka.

Sochi, the Black Sea resort, has become familiar with more of us since the 2014 Winter Olympics.

And Vladivostok is the city on the Pacific side, known for its hills, its battle ships and for being the terminus of the Trans-Siberian Railway.

Use our guide to the best places to stay in Russia and start to plan your trip to this vast and fascinating country.

The best places to stay in Russia

For a self-catering Apartment

Still not sure which is the best place to stay in Russia for you? 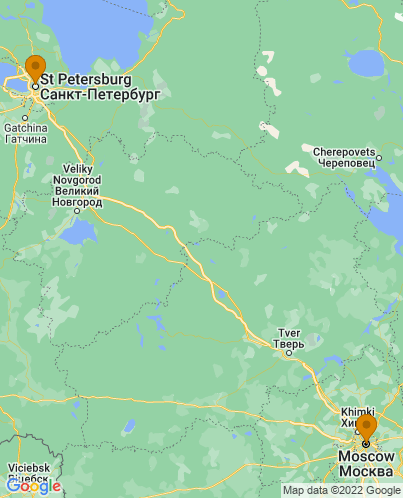