Check Availability
24 rooms from £134 per night 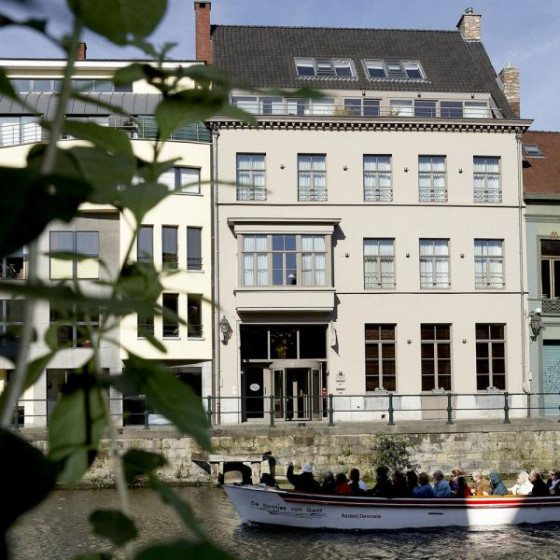 “Modern and stylish hotel in two historic buildings, in a great central location. Highlights into a pretty courtyard garden and a pool. Top floor rooms have great views.”

“Modern and stylish hotel in two historic buildings, in a great central location. Highlights into a pretty courtyard garden and a pool. Top floor rooms have great views.”

In the heart of ‘t Patershol, Ghent’s oldest district, Hotel Harmony is a terrific find just around the corner from Castle Gravensteen, with other attractions, such as St Bavo Cathedral and the Belfry, within a few minutes’ walk. It occupies two beautifully restored historic buildings, one right beside the canal, the other behind, where old and new have been imaginatively fused, and a stylishly contemporary interior is warmed by wooden floors and brick walls. The large, spotless bedrooms have modern furniture and light bathrooms with big bathtubs. Try for a top-floor room with a breathtaking view over the centre of Ghent, including its trio of towers. The courtyard garden, nestled between the two buildings, is a great place to relax and enjoy breakfast or drinks after a tiring day’s sightseeing, and there’s even a swimming pool, which comes into its own in a heatwave.

See What They Say

Our hotel in Ghent is without any doubts one of the most cozy family hotels in the city. Some of our rooms overlook the most breathtaking views of the historical centre of Ghent, including its three towers.

The hotel consists of 2 buildings with a beautiful garden in the center, where you can relax and if the weather permits enjoy your breakfast.
The building situated on the "Kraanlei" was built in 1859. In the same year, the building, which consisted of 2 houses with a stepped gable, became a large mansion. In 1961 the house was expanded by an extra floor.

The building located on Corduwanierstraat used to be a storage space, built in 1766 by Mr. Van Loo Heyndrick, a fisherman. In 1863, after Mr. David Tertzweil bought the building, the storage space was expanded by one floor.

The foundations of these buildings are from pre-18th century, but its not known the exact year in which they were built.