Search the best hotels in Panama

All our Panama collections:

'The Canal' is the first thing many people think of when they think: Panama. But a cruise through the famous shipping route might not even make the list of top ten of best Panamanian experiences. It's this default to the canal which makes Panama a bit of an untapped resource and many of the best places to stay in Panama have avoided even the keenest travel radars.

But this spectacular country offers the same kind of attractions as its Central American neighbours, sizzling nightlife, elegant colonial architecture, exotic coffee farms and rainforests teeming with life. Plus it's almost entirely ringed by beautiful beaches, with the Caribbean winds sweeping onto perfect white beaches on one side and the swells of the Pacific on the other!

If you want to explore Panama's mysterious cloud forests and its amazing biodiversity, La Palma, with the best of the countries national parks, is one of the best places to stay in Panama. If you're here for a dash of the Central American lifestyle, Panama City is for you.

Panama is a destination ripe for discovery. Much of the country has good infrastructure, but it still feels unspoiled, and when you traipse through the jungle and come upon Spanish ruins, snorkel on the reefs off Bocas de Toro or spend some time with one of Panama's seven indigenous groups, you'll still get a sense of exploration-wonder.

Cosmopolitan Panama City is that curious animal, a tropical capital of International finance. Its skyscrapers are an ever growing work in progress, but the salsa rhythm from its old dance halls, a la old Cuba, are as unchangingly South American as can be.

Most of Panama's historic attractions are in the elegantly dilapidated Casco Viejo. This is also where you'll find many of the best bars and restaurants and entertainment.

But it's also worth visiting Panama la Vieja, the ruins of the old town, sacked by pirate Henry Morgan so badly in 1671 that it was easier just to build a new city a couple of kilometres away rather than rebuild the old city.

Area Bancária is the financial district and Panama's skyscraper central. This is also the place for higher end shopping and eating.

Off Panama's Caribbean coast are a number of desert island idyll type islands, but on the Pacific side you'll find great surfing towns and the opportunity to dive with whale sharks.

Bocas Del Toro on the Caribbean coast feels very Caribbean, and makes a relaxed base for exploring the archipelago - both above and below the waterline.

Panama has quite a few national parks.

If you're here to see a Quetzal one of the best places to stay in Panama is Boquete - also the country's coffee capital.

As well as the rain forests and cloud forests, Panama also has a national marine park, surrounding Panama's largest island, Coiba. This is where you can wonder at some of the impressive biodiversity close up; there's several different species of whale, turtles, crocodiles, dolphins - and that's just in the water. Santa Catalina is the best place to stay to see the marine park.

Still undecided? Browse though our list of all the best places to stay in Panama, or contact, one of our friendly gurus for advice. 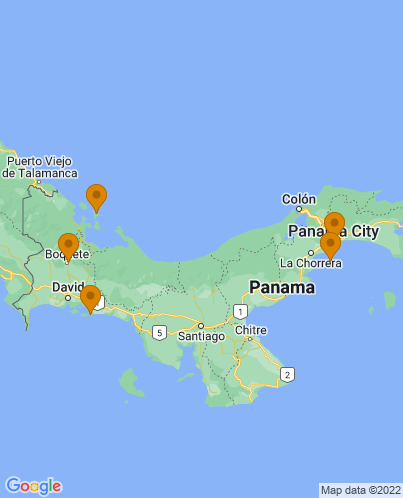