Search the best hotels in Bilbao 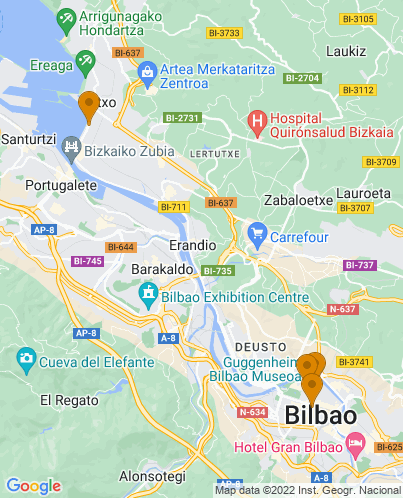 Bilbao has often been described as an 'urban phoenix', a colourful phrase reflecting the city's rise, in blazing colour, from a decaying industrial city in the nineties to the cultural powerhouse it is today. The arrival of the magnificent Museo Guggenheim helped, but this city's appreciation of food, football, and festivals are what's kept the culture fresh while it's been beavering away industriously. The selection of the best places to stay in Bilbao also reflect this renaissance and some are as hip as the city's art installations.

The largest Basque city, Bilbao is a busy port just inland from the coast, spreading out around the estuary, with the Old Town on the right bank and the newer areas on the left. The centre is a good size to explore on foot, but if you want to spread your wings further there's an excellent, easy to use, public transport system.

Our pick of the best places to stay in Bilbao are mainly located in the centre of the city (one right beside the Guggenheim), but we've also selected a charming hotel in Getxo which enjoys a sea front location whilst also allowing easy access to all that Bilbao has to offer.

The Best Places to Stay in Bilbao

For visiting the Guggenheim

For a villa or apartment