Search the best hotels in Cádiz 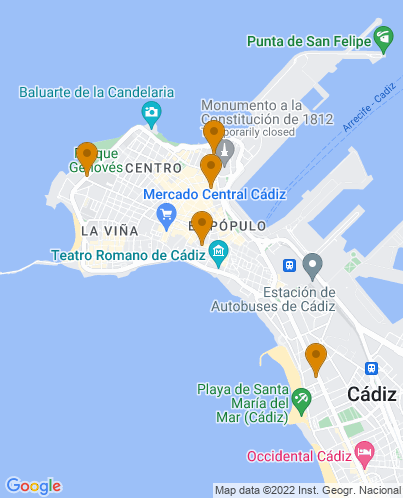 Now in its fourth millennia, Cádiz is thought to be the oldest continuously inhabited settlement in Europe and it's an excellent choice for people who appreciate their sun and sand seeped in history. The old heart of town is almost completely surrounded by water now as the Atlantic crashes gustily at the crumbling sea wall. But there's plenty of energy in the locals, who're known for their ironic Carnival, where the songs parodise and ridicule politicians, celebrities and even the church. The also sing cheerful flamenco songs. Our Guru’s recommendations for the best places to stay in Cádiz offer beach access but something else besides. If your idea of the best places to stay in Cádiz have a maximum budget attached then we think you’ll be pleasantly surprised by what’s on offer.

Cádiz really does have everything. The beaches are relatively small but there are much larger stretches just along the coastline. The old town is a wonderful jumble of streets and alleys ripe for exploring and treasure hunting. There are monuments a plenty and an enticing food culture involving a lot of seafood and outdoor dining. Cádiz has the wonderful fortifications of a Spanish colonial city, and the eroding sea walls - built after Sir Francis Drake’s sacking in 1596 - create a romantic atmosphere of gradual change that often inspires us to seize the moment.

Cádiz is fairly easy to get around. It’s not large, but if you do want to get out of the old town and explore the new town and its larger beaches then there’s an easy to use bus service.

Some of the highlights are the old cathedral with the wonderful North Tower and the Roman theatre just behind it, the Archaeological Museum, the grand Oratorio de San Felipe Neri, which is where the first Spanish Constitution was signed and the Torre Tavira, which is a tower by the market with a ‘camera obscura’ and incredible views.

Don't forget that this is an incredibly popular destination. So if you want to be sure of a room in one of the best places to stay in Cadiz, get organised and book well ahead.

The Best Places to Stay in Cadiz

The Best Places to Stay in Central Cadiz

Prefer an apartment or villa?