Search the best hotels in Missouri 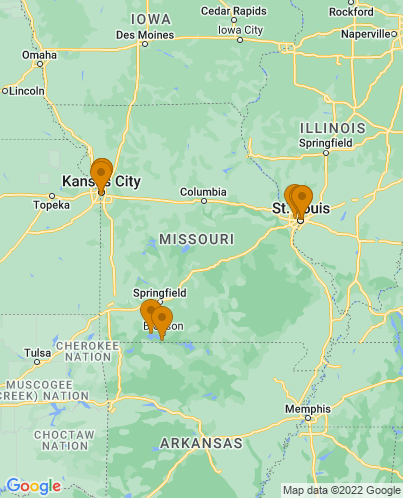 Missouri offers many of the charms of other Great Plains states - the wide open spaces, lush forests with their amazing fall shows and rolling mountains, in Missouri’s case the Ozarks - but it’s also got a couple of sophisticated cities and colourful country towns. Thus the best places to stay in Missouri range from bustling city break high-rise hotels to remote forest lodges perfect for escaping back to nature.

St Louis, Missouri’s capital, is a huge midwestern metropolis with a fascinating trading history stemming from its position on the Mississippi and Missouri Rivers, and is probably one of the best places to stay in Missouri if you’re looking for a cultural city break.

If you’re in Missouri to tread the footsteps of Mark Twain then Hannibal is for you, and if you want to follow the pioneers then try St. Joseph.

If you’re looking for the quintessential midwestern town then try Independence - home of President Harry S. Truman, and if you’re just looking for a cheerful holiday town then Branson is for you.

Or check out some of the state’s highlights here.

Starting with capital, St Louis, known for its cultural heritage, for being a green and pleasant city, for its distinct neighbourhoods, for its Gateway Arch - the world’s tallest manmade monument, and for its beer and baseball. You can’t help but see the Gateway Arch, and will probably find the idea of taking a trip to the top irresistible.

Forest Park, the setting for the 1904 World Fair, which is still very much spoken about in St Louis, is another obvious ’must see’, and it’s just full of free attractions and activities. The kids, if you have some, will love it. They’ll also love the City Museum - it sounds dry but it’s not at all, it’s in a converted shoe factory and has a seven storey slide and a ferris wheel on the roof.

Historic St Charles and Hannibal are just outside the city proper.

Kansas City is idyllic if you love barbecues, jazz and fountains - apparently they have about the same number as Rome? They also have the National WWI memorial and Independence, where you’ll find the simple Truman Home and the Truman Presidential Museum and Library. The National Frontier Trails Museum, is just to the east.

If you’re interested in the wild west then St Joseph is for you, this is where you’ll find the Pony Express National Museum, the Patee House Museum and the Jesse James Home Museum, which is also where he was shot - you can still see the bullet hole in the wall.

The Ozark Mountains are definitely a highlight for anyone looking to escape in amongst some grand scenery. The Black River rushes swiftly, cutting its way through deep gorges and over dramatic waterfalls. The park headquarters is in Van Buren, along with many of the hotels, but Eminence is also a good base.

Our pick of the best places to stay in Missouri feature something for everyone, whether you're plannig a city break or an escape to the country

The Best Places to Stay in Missouri to Escape

Still not sure? Browse through our list of all the best places to stay in Missouri, or contact one of our friendly Gurus for advice.