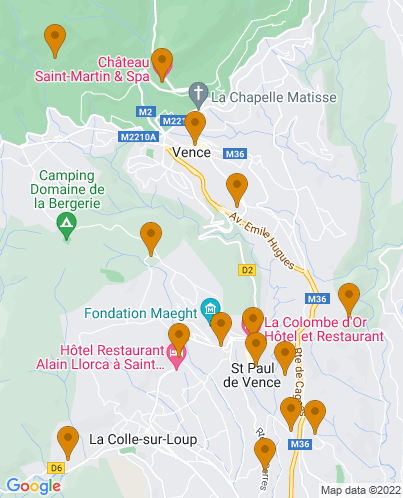 Perched on a hillside, Saint Paul de Vence is one of the oldest perfectly preserved medieval towns on the French Riviera. It is particularly notable as an artist's haven since the early twentieth century. The best places to stay in Saint Paul de Vence offer an idyllic hideaway just seven kilometres from the beach and a short drive from the glamorous resorts of Cannes and Nice.

The opening of a tramway in 1911 transformed the town - enabling local farmers to export their produce to Nice, Antibes and Grasse and making this lovely place accessible to the outside world.

Artists discovered Saint Paul de Vence in the early 1920’s, Raoul Dufy was one of the first to come here - attracted by the light and colour. The artistic community formed a centre around the classic Colombe d’Or Hotel which is adorned with many of their works - Picasso and Chagall amongst them. In the 1950’s the town became a popular film location.

If you only plan to spend a night or two exploring the town, then we'd advise you to book a hotel in the centre of town. But if you're staying for longer and want to get out and about, then you'll be better off with one of our recommended properties in the surrounding area, from where you'll have easy access to both the beach and the charming Provencal towns and villages.

The best places to stay in Saint Paul de Vence get booked up very early during the peak summer months. So you'll need to either plan well ahead if you wish to visit in July or August, or change your dates and come in the shoulder season when the weather is still lovely, but the crowds have gone.

To See The Côte d'Azur

For a self-catering Apartment or Private Villa

Still not sure which is the best place to stay in Saint Paul de Vence for you?