Search the best hotels in Vendée 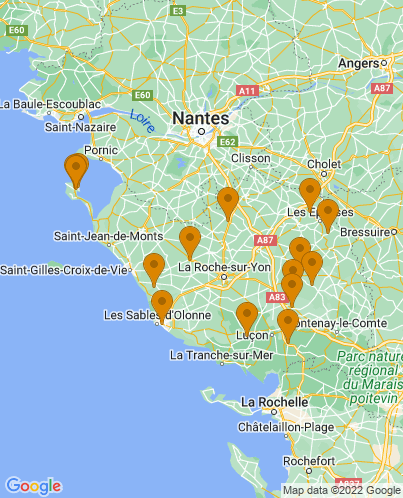 The Vendée department borders the Atlantic Ocean on one side and the Loire Valley on the other, and is named after the lovely Vendée River that runs though the region. It’s a beautiful, peaceful place, but possibly best known for its numerous historic revolts and uprisings, so there’s a historic edge to the department’s serenity. The best places to stay in the Vendée tend to be charming châteaux or guesthouses in smaller towns, rather than the larger centres.

One of the main attractions of the Vendée is the department’s beaches, all 200kms worth of them, most of them sandy. A number of beaches have blue flags, and there are a number of seaside resorts, including Les Sables-d’Olonne and Saint-Jean-de-Monts. Many beaches are fringed by sand dunes or pine woods, and there’s a gentle roll in from the Atlantic to the land, rather than dramatic cliffs or rock formations. There’s a great bicycle route along one section of coastline, passing beside the marshes and mudflats, (home to a number of interesting bird species), and there are cycling and walking routes running all over the region.

Just inland you’ll find the Marais Poitevin, which is a marshland and forest national park near the village of Mervent. This is a very popular spot with wildlife lovers.

The Vendée also has a number of significant churches, abbeys and museums.

Our pick of the best places to stay in the Vendee range from a family friendly château hotel to a Michelin starred restaurant with rooms.

For a rural escape

For a holiday villa or apartment

Still not sure which is the best place to stay in the Vendée for you?