Search the best hotels in Kastellorizo 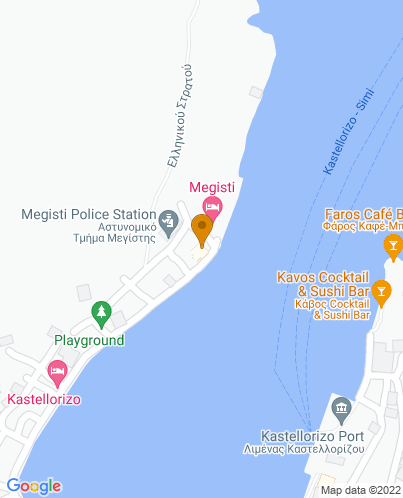 For a Greek island, and one of the Dodecanese group, Kastellorizo is really close to mainland Turkey - just 2kms offshore from Ka?.There is a very different feel - far more Eastern with a minaret as well as pastel coloured houses and a ruined fortress. Most of the best places to stay on Kastellorizo are in the main port and largest town, Kastellorizo, which stretches colourfully around a bright turquoise bay.

Kastellorizo is known for being friendly and arid - some people say it reminds them of Symi, but without the price tag and yachts hogging the harbour. It’s also know for the Blue Grotto, one of the most beautiful in the Mediterranean. There are plenty of charming things about this island and its history, one of the nicest being that its official name is Megisti, meaning greatest or largest, but it’s actually the smallest island in the group. That might be part of the reason the name Kastellorizo has been used since the 12th century. Though the island supported a limited community in antiquity as it has no natural source of drinking water.

Once home to around 9,000 people, the island has suffered regular catastrophes, including an earthquake, occupation by the Venetians, Turks, French, Italians and the English - and then sustained bombing by German forces in WW2 when the Allies were leaving. But this hasn’t lessened the effect of arriving on the island, it’s a really special experience, where it feels like all the island’s treasures are laid out in front of you to clearly see.

As with many small islands that are popular the best places to stay on Kastellorizo are quickly snapped up. So do plan ahead and book early.

The Best Places to Stay on Kastellorizo

If you’d prefer to stay in an apartment or private villa we recommend you visit our online partner booking.com.