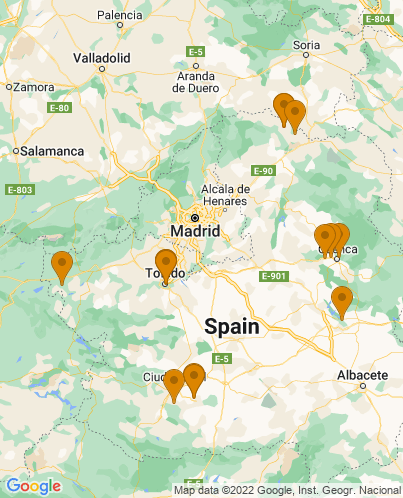 Castile-La Mancha begins just outside of Madrid, on fertile plains and high plateaux dotted with windmills. The kind of windmills made famous by Cervantes in Don Quixote. This region’s beautiful ancient cities are where you’ll find some of the best places to stay in Castile-La Mancha, along narrow cobbled streets, or in grand plazas.

But this is also a wonderful region to escape to if you’re looking for peace and tranquility amongst nature, and our Guru’s recommendations for the best places to stay in Castile-La Mancha certainly include some ideal places to escape to.

This is a peaceful region of vast vineyards and medieval-era fortress towns with impressive churches, and mosques, and crusader castles. And of course numerous statues and museums of Don Quixote. And you’ll find that many of the places mentioned in the book haven’t changed much since they were written about five hundred years ago.

Ciudad Real is the capital of of La Mancha, land of Don Quixote, and sits amongst the windmill dotted plains. A working, but charming city forever indebted to Cervantes' romantic imagery. Modern Ciudad Real is probably most popular for its food, especially game and cheeses, and wines. The Plaza Mayor and the area around it are good places to start tasting, but there are numerous vineyards which will open their doors to you on the plains outside the city. Within the city, surrounded by four kilometres of protective wall, are towers, Gothic churches, a 16th century cathedral and a Don Quixote Museum.

Once Spain’s capital, Toledo has long been a religious and cultural centre, so it might seem smaller than you’re expecting. But it's home to a wealth of beautiful religious buildings - from churches, to mosques and synagogues, set around an old town ripe for discovering. Toledo can be busy with day trippers, so it's worth staying through the evening, when the city is even more magical - but don't worry, the best places to stay in Toledo are quite affordable.

Cuenca's wonderful casas colgadas, or 'hanging houses', built precariously onto, and into, the cliffs and gorges which surround the town, are one of the reasons this little city captures the imagination of so many travellers. These wonderful constructions, but also Cuenca's old town, with its beautiful medieval architecture and Gothic cathedral, are why UNESCO has included the whole city on its World Heritage list.

Or head for one of the smaller centres, like Atienza, Consuegra - for its windmills, Almagro - for its theatre, or sleepy, but historic Sigüenza. Castile-La Mancha also has several national parks, the Cabañeros National Park between Toledo and Ciudad Real and the Tables de Daimiel National Park, a floodplain in Ciudad Real.

Use our guide to the best places to stay in Castile-La Mancha and start to plan your adventure!

For an historic stay

The Most Romantic Places to Stay in Castile-La Mancha

Still not sure which is the best place to stay in Castile-La Mancha for you?