Search the best hotels in León 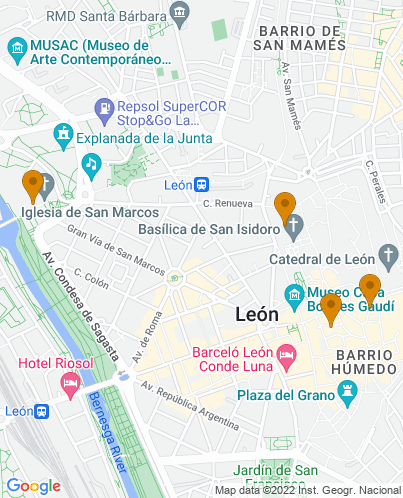 León’s beautiful, historic architecture is really this city’s star. León’s old quarter, the Barrio Húmedo is particularly picturesque, with arguable one of Spain’s most impressive cathedrals - with simply divine stained glass. And, as an important post on the Camino de Santiago, León’s other churches grew to be quite impressive as well.

In the evening León shows its lively side. This is a university town and there are plenty of young people keeping the energy levels youthful. Some of the best places to stay in León manage to capture both its history and energy, and there are some wonderfully converted historic buildings. But if you’re looking for something peaceful, or many a base for exploring the whole Castile-León region, then it’s worth considering our Guru’s recommendations for the best places to stay in León and surrounds.

It isn’t just León’s religious builds which are worth visiting, its Panteón Real, is an amazing vaulted hall of royal sarcophagi, at rest under some of Spain’s finest frescoes. León also has a well ordered museum and an extremely impressive contemporary art gallery. There are also graceful palaces and plazas, and the remains of the city’s original defensive walls. And there’s even a building by Gaudi, the Case Botines, one of his few commissions outside of Barcelona.

León’s also a great place for a foodie stop-off. The local delicacies include morcilla, which is like blood sausage, cecina, which is cured beef and brillo, which is stuffed pork intestine.

The Best Places to Stay in León and Surrounds

Still not sure which is the best place to stay in León for you?