Search the best hotels in Sweden

Some of our Sweden collections:

When it comes to choosing the best places to stay in Sweden Stockholm makes for a great city break, summer or winter. And the whole country is ideal for families, with easy to drive on roads, good public transport and of course all that fascinating and dramatic Viking history. There's also the unusual cold climate fauna and of course Lappland, with its nomadic Sami traditions and that guy with the red suit with the white fur.

Sweden's natural assets are exceptional, this country is spectacularly beautiful, a wonderful landscape against which to sail, hike, cycle, fish, camp, or whatever else you like to do outdoors. But this is also a country which makes the best of itself in every way. Buildings and public spaces are designed with great care, the priority being functionality and simple, but aesthetically pleasing lines. Many Swedes bring this care into their dress and their own homes and it is certainly evident amongst the best places to stay in Sweden too.

Sweden is so well set up for adventurers that even in the capital Stockholm there's plenty of action to be had. In summer one of the nicest things to do is to sail across the archipelago, maybe visiting an island or two, and possibly even spending a night under the stars. To the north are the hiking trails, and all around are land ripe for foraging - collecting berries and mushrooms is a bit of a national pastime.

The Kungsleden, or 'King's Trail' is Sweden's most famous hiking and cross country skiing route, spanning 450kms from Hernavan to Abisko, and if you're here to pound a trail, this is the one to walk a portion of.

If you're interested in Sweden's history visit the Foteviken Viking Reserve, north of Höilviken, which is a living reconstruction of a Viking Age village! Sweden has a number of wonderful open air museums, which are similarly reconstructed, or restored, ancient sites, often with accompanying indoor museums.

Less well known than ship building and fish pickling, Sweden also has a number of glass blowing workshops, and Glasriket, 'The Kingdom of Crystal' is where you can find the largest concentration of workshops and factories.

Built in warm yellows and oranges, Stockholm has got to be one of the world's most beautiful capitals. The city itself is small, with the old town, Gamla Stan and the Royal Palace, at its heart. So you can walk to most of the sightseeing highlights. And to most of the best design boutiques, glacially cool cafes and world class restaurants.

Fårö and Gotland: Windswept and Romantic

Known for its cycling paths and beautiful sunsets, Fårö has spectacular rock formations and a coastline riddled with fossils. It's also got a famously remote lighthouse, a historic playground and one of Sweden's excellent open air museums. To the south of Fårö is Gotland, Sweden's largest island and home of Visby, a totally unique town key to Middle Ages trade. As well as this UNESCO Heritage Listed treasure, Gotland has over 90 medieval churches.

Åre: For the Skiing

Åre, which sits in a mountain valley by the shores of a beautiful lake, is one of the best places to stay in Sweden if you want to get out on the pistes. It is inundated with skiers and snowboarders in winter, and by extreme sports-folk in summer. It's also known for its spas - which tend to go hand in hand with high end ski resorts - and as a traditional reindeer herding ground for three Sami villages. So you can also expect to see plenty of reindeer.

Still not sure? Browse through our list of all the best places to stay in Sweden, or contact, one of our friendly gurus for advice. 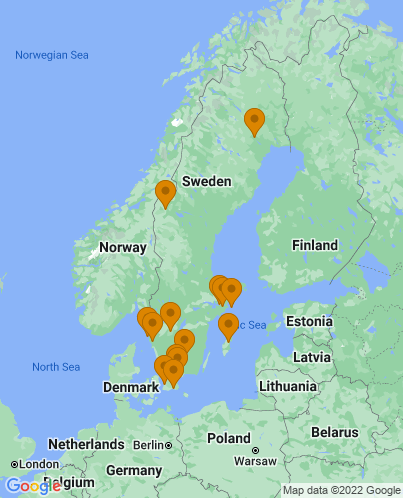