Search the best hotels in Essaouira 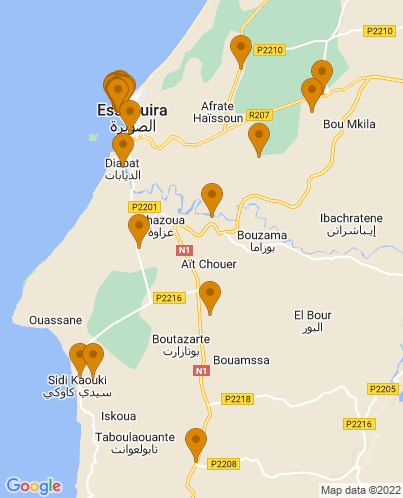 Essaouira spreads along a long sandy strip of Morocco's Atlantic coast. The kind of place you'd imagine Peter O'Toole's Laurence of Arabia riding in to from the desert. Definitely Moroccan, but with a European familiarity - it was designed by a Frenchman. What wouldn't work for Toole's Laurence is the air full of windsurfers and kitesurfers. Some of the best places to stay in Essaouira cater for this crowd, but most are ideal for those who are here for more than the waves.

The powerful and constant wind, the locals call it alizee or taros, which makes this sunny, sandy destination unpleasant for people who want to sit on the beach, makes Essaouira heaven for windsurfers and kitesurfers. And in a way it's these active travellers who've helped protect Essaouira's natural charms from becoming over touristy.

Today the busy medina is just as important a market place as it ever was. This port is not just a pretty museum to its past life, it's still vibrant. Essaouira's protected natural harbour made it an important trade route, hence the massive medina. The labyrinth of streets has been famously recorded by many and is a delightful tangle of treasure - and a nightmare for cars - so visitors are forced to navigate the same pathways as the sugar pirates who influenced the layout of the town.

The beach is long, curving and quiet and the hotels are – generally – more boutique one-offs than Travelodge, so the vibe is more independent traveller than tour group. The streets are too narrow for those big buses.

It's only from the outside that Essaouira looks European, within the narrow alleyways permeated by spicy smells whipped around by the wind it feels very Moroccan. As well as the spices and the smell of the sea the air is filled with the sounds of Gnawa singing.

This is also a great place to visit in winter, when it's quieter and many of the best places to stay in Essaouira are not so busy.

The Best Places to stay in Essaouira

For a Sunny City Break