Search the best hotels in Pembrokeshire 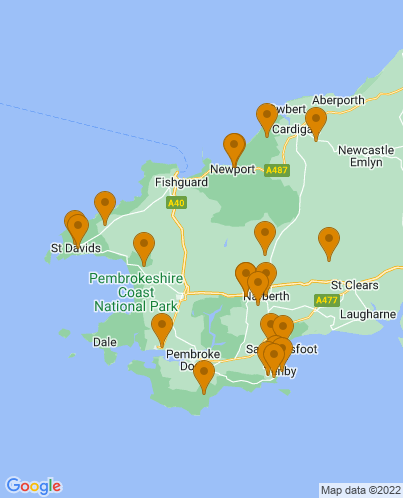 Pembrokeshire is wild and beautiful, with a dramatic coastline created by glaciers and spiked with limestone stacks. This rugged nature alternates with peaceful, sandy coves, behind which are charming ports and some wonderfully atmospheric castles. Some of the best places to stay in Pembrokeshire can be found in these pretty ports, and some even in the castles.

Pembrokeshire’s coast is so beautiful that it’s had national park status bestowed upon it; the park covers about a third of the county, including the whole 299km stretch of the Pembrokeshire Coast Path, and the Preseli Hills, an area of high moorland, largely used for sheep farming, but also the location of some important prehistoric sites.

Pembrokeshire’s beaches are often award winning, and they make a fantastic backdrop for walking, surfing, sailing, sea-kayaking or simply admiring the marine life. Pembrokeshire also has a number of charming little islands off the coast. And a quite an impressive number of shipwrecks - including a famous Viking wreck, which is just off The Smalls.

The interior is wild and beautiful too, with a number of impressive pre-Celtic and Celtic sites as well as the castles. Then there's charming St. Davids - which is the UK’s smallest city, but a fairly special one -closely associated with Wales’ patron saint, and home to his spectacular cathedral.

Pembroke was the founding town, and has a number of historic buildings and Pembroke Castle, where Henry Tudor (who became Henry VII) was born. Tenby is a popular centre too, with its medieval walls and elegant seaside; Fishguard is where you catch the ferry to Ireland from.

Don't forget that if you want to guarantee a room in one of the best places to stay in Pembrokeshire during the peak summer months, you'll need to get organised and book well ahead. This is a very popular region!

The Best Places to Stay in Pembrokeshire

For a Country Retreat

A Coastal Jaunt in Saundersfoot

Or see the wild coast by St. Davids?