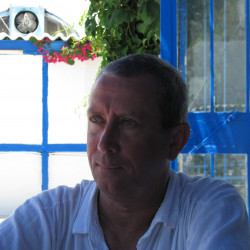 Robin Gauldie has been a compulsive traveller all his life. As a hairy student, he hitch-hiked all over Europe, Morocco and Turkey. After graduating from Edinburgh University in 1976, he worked as a reporter on local newspapers in Scotland and London before joining the pan-European travel industry newspaper Travel Trade Gazette Europa in 1979. He spent the next ten years travelling to the world at other people's expense, frequently in first class. To stay honest, he spent a month each year island hopping around Greece, sleeping on beaches and in olive groves. He has been a freelance journalist since 1989, writing for the travel sections of national newspapers including The Sunday Telegraph, The Observer, The Times, The Sunday Mirror, The Guardian and Scotland on Sunday. He is the author of more than 20 travel guidebooks to destinations including Greece, Scotland, France, Portugal, Egypt, Morocco, Amsterdam, Ireland, Goa and Mumbai, Sri Lanka, Estonia and Peru. His hobbies include black-powder pistol and target rifle shooting, scuba diving, walking, painting, and watching wildlife. After living in London for more than 20 years, he now makes his home in Edinburgh but spends part of each summer in a second home in the hills of the Languedoc. He spends at least two months each year travelling in Greece, a country of which he never tires. Linkedin