Search the best hotels in Serifos 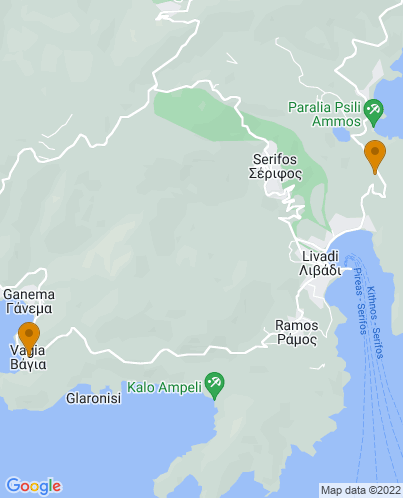 Serifos is a small Greek island in the Aegean's Western Cyclades. It lies about 90 miles east south east of Pireaus and is accessible by hydrofoil in around two and a half hours.The best places to stay in Serifos are perfect for soaking in the beauty and serenity of this unspoilt place. And Serifos is very much a place that the Athenians would like to keep to themselves!

In mythology, this is where Perseus and his mother Danae washed ashore after Acrisius, King of Argos cast them adrift in a wooden chest, having been warned by an oracle that his Grandson would kill him. Perseus subsequently returned to the island with the head of the Gorgon and turned the island’s King and court to stone for his unwelcome advances to Danae.

In more recent times Serifos was notable for its Iron and copper deposits, and it enjoyed an economic boom which lasted until the 1960’s.

Apart from the natural beauty, there is much to see;

This island, like the rest of Greece, is much busier during the peak summer months. So despite being off the beaten track, the best places to stay in Serifos will get booked up quickly during July and August.

Nothing here that suits? Widen the net and check out all our Cyclades recommendations, or contact a friendly guru for advice.