Search the best hotels in Viareggio 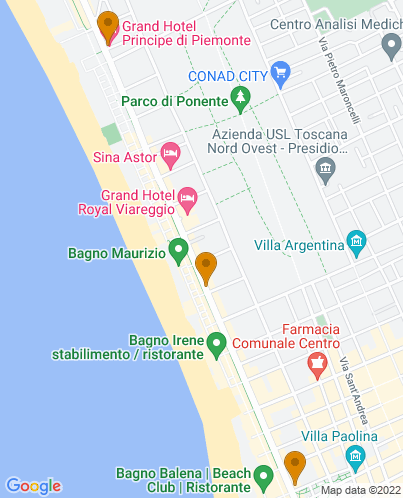 Between the glistening blue of the Tyrrhenian Sea and the bright marmoreal peaks of the Massa Carrara stands Viareggio. The ideal place for a family seaside holiday, the city lies alongside a 10km stretch of golden sandy beaches, lined with cute cafes and gelato shops and it is here that you will find the best places to stay in Viareggio.

The city began life in 1172 when it was established as the port of nearby Lucca: the Torre Matilde, a fort that still stands today, was erected around this time and it is around these walls that Viareggio sprang. However, it was not until the 19th-century that the city saw a boom in its fortunes: a harbour was built in 1819, and in 1822 it became the hostess of Napolean Bonaparte's sister, whose holiday here quickly put Viareggio on the map. In the same year, the body of the Romantic poet Percy Shelley washed up on one of its beaches. By the 20th-century, art-deco villas and liberty-style buildings began popping up around the city, and fantastic art galleries like the Villa Paolina Civic Museum opened up.

However Viareggio remains surprisingly untouched and relatively unknown by foreign tourists though it does remain a favourite of Italians, who flock to its lovely streets every year for the world-famous Carnevale, that takes over the streets and soul of Viareggio for 4 weeks every Spring. By day, parades of papier-mache floats trundle through the city, bearing caricatures of politicians and celebrities; by night, the streets come alive with music, dancing and parties that run till dawn.

This is a destination with plenty to offer; browse through our selection of the best places to stay in Viareggio to start planning your trip.

The best places to stay in Viareggio