Search the best hotels in Barcelona 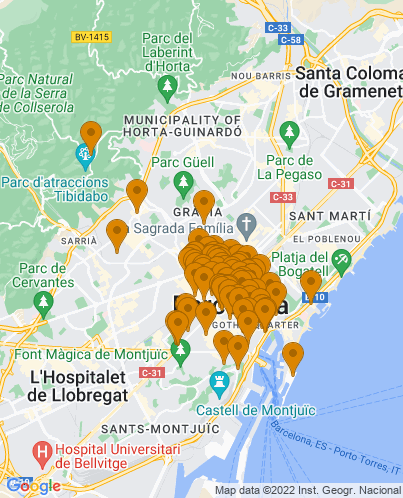 Barcelona is a perfect city to explore on foot — it's choc-a-bloc with unexpected pleasures, and you'll really miss out if you just shoot from one highlight to another. And that’s why we think it’s so important to really consider your areas when it comes to choosing the best places to stay in Barcelona. The bit of town around your hotel is the bit you’re going to meander through most, so it’s not a bad idea to have a good peruse of our Which Neighbourhood section before you pick your favourite hotel.

Some of our Barcelona Collections:

We’ve tried to compile the best places to say in Barcelona with an eye to fitting any budget and style, as well as any kind of Barcelona break, but one of the reasons this city makes such a rewarding destination is that its architecture is ever-evolving — from Gaudi's epic Sagrada Familia to Jean Nouvel's imposing Torre Agbar, so there’s always something new to see, and always a new hotel to include on our list.

And somewhere new to eat! And be romanced, because Barcelona is a beauty like no other, thanks, in part, to her lovers, a collection of famed artists and architects. But it's also a sultry city, where long, hot evenings are ripe with flavours to sample and filled with pleasurable entertainments of all kinds.

Barcelona is a very popular destination year round, so if you want to guarantee a room in one of the best places to stay in Barcelona, do your homework, get organised and book well ahead.

The Best Places to Stay in Barcelona

Some of our Favourite Hotels in the Gothic Quarter

The Best Hotels in Eixample