Search the best hotels in Umbria 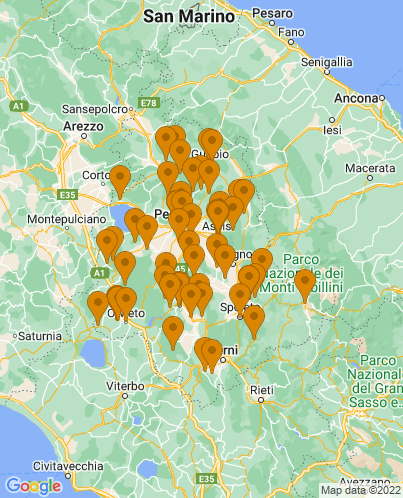 Land-locked and country-locked, it might surprise you that Umbria is greener than the rest of Italy. And while you’ll have heard of its beautifully preserved medieval hilltop towns, incredible scenery, which is often described as mystical or magical, and incredible art collections, you might not have heard people speak of it as the ‘old’ Italy, where traditions are at their strongest. Because, surprisingly, considering some of its show stopping towns and magical landscape, Umbria is relatively undiscovered. Our Guru’s recommendations for the best places to stay in Umbria include some wonderful old palazzos and country villas, and although unable to claim as many hotels and agriturismi as Tuscany, Umbria can generally be said to offer better value.

Some of our Umbria Collections:

Where to stay - which town or village?

Capital of this region of medieval hilltop villages and the undulating hills they perch upon, Perugia is a glorious medieval hilltop village with a wonderfully historic centre, out of which emanates a tangle of cobbled alleyways where you’ll discover graceful squares, impressive galleries, hallowed churches and cafes and restaurants. Renowned for its art and architecture, Perugia is also known for its chocolate. And its annual international jazz festival held in July - the juxtaposition of the jazz in these medieval surroundings is quite something. Perugia is also close to Lake Trasimeno, another of Umbria’s highlights, and an obvious magnet for sun-seekers during the summer.

In a countryside dotted with astonishingly beautiful hilltop towns, Assisi stands out. Are its connections to St. Francis and St. Clare what make it so magical? Or did the heavenly appearance of this spot in particular, with its views over the surrounding plains, and Monte Subasio rising above, call out to those sensitive souls? Assisi has been an important pilgrimage site since the the 13th Century, when the Basilica of San Francesco was built over his earthly remains, so it can be quite busy. And to really experience Assisi's allure you need to see this place at dusk, when today's portion of the six million annual visitors and pilgrims has left and its pale stone glows an angelic rose colour.

Orvieto sits beautifully, but inconveniently, at the top of a steep, volcanic hillside. Founded by the Etruscans, the town was designed to be impregnable. This lofty position has made it difficult to over-develop the town. Change takes time here, and that's why it's so unspoilt, uncrowded and home to so many of Italy's most beautiful buildings, including the duomo, one of the few sights really worthy of being called ‘a feast for the eyes’, and some impressive artworks, including The Last Judgement by Luca Signorelli, which was said to be an inspiration for Michelangelo's Sistine Chapel. Plus Orvieto produces some very fine white wine…

Norcia is off the beaten track, and built on a geological fault line surrounded by mountains. Due to its treacherous location, no building is allowed to be more than two storeys tall (since an 18th century edict), so the grandeur is displayed rather in terms of ornate balconies and delicate stone carvings.

Tourists flock to see the world-famous sights in Assisi and Orvieto, but few explore the delightful medieval towns of Montefalco, Bevagna, Spello or Byron’s beloved, Trevi, or the stunning, remote upland plain known as the 'Piano Grand' near Castelluccio. Todi is another must see. Steeped in history, it is the perfect example of an Italian hill town; think ancient buildings, stunning views and a reassuringly slow pace of life.

Don't forget that this charming region gets extremely busy during the peak summer months. So if you want to guarantee a room in one of the best places to stay in Umbria, get organised and book well ahead.

The best places to stay in Umbria

For a self-catering Apartment or Villa