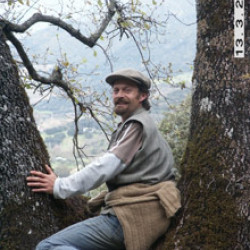 Tristram's passion for foreign cultures was sparked by a trip around the world at the age of 19. He then went on to study English at Newcastle University, and so began an insatiable interest in books and literature. Since leaving Newcastle he has worked primarily in sales, promotions and marketing, whilst still managing to squeeze in a couple more long-haul trips.

After a six-month stint in South America he found himself gravitating towards Hispanic cultures, and so in 1999 he set off with his wife Melanie, in a converted post office van, to begin a new life down in Andalucia. They now live the typical 'Andaluz dream' in a small, white-washed farmhouse with a lurcher, a black and white cat, and a baby on the way! Tristram spends his time working as a freelance walking guide, landscape gardener, tree surgeon and general 'fixer'. In his free time he's generally to be found with his nose in a book!