Hotels In The Netherlands

Search the best hotels in The Netherlands

Best Hotels in The Netherlands

Windmills and clogs are probably no longer as prevalent as the traditional stereotypes about the Netherlands would have you believe, but if you visit in Spring, tulips and bicycles probably are. These days the Netherlands is probably just as famous for its liberal politics and open minded approach to, well, to a lot of things! Its land grab from the ocean, its art collections and beautiful canal-lining towns and cities. The Hotel Guru's selection of the best places to stay in the Netherlands are all well situated to make the most of this fascinating country.

The Dutch have a reputation for height and directness, making it easy to ask for directions. They're also more likely to direct you to the coffeehouse serving the best coffee, rather than the kind teenagers on their first trip away from home might be looking for. Most of the stuff stag-dos are keen on is kept to one part of Amsterdam, conveniently located for the train station, while the rest of the city, and the country, is more about art, heritage, beautiful architecture and design, flowers, sailing, dykes and cheese - to make totally unfair and limited generalisations.

The landscape here is iconic and crepe flat. More than half of it is actually below sea level, and 20% of the current land of the Netherlands has actually been dredged from the sea. These reclaimed bits are called polders and they’re a fascinating and unique sight. The Netherlands has long been known for windmills but these days it’s not just the ones with the sails which feature on Delftwear and in songs about mice, these days modern windmills sprout too, helping to sustain the country’s agricultural wealth. The flatness might appeal to you if you fancy biking around. And a lot of people do, both for their day to day travel and intercity. And this popularity of bikes means that the facilities for riders is excellent, with more than 32,000kms worth of cycle paths.

As countries go, the Netherlands has one of the world's best art collections. Rembrandt, Van Gogh, Vemeer, Mondrian, Frans Hals, Hieronymus Bosch, there are plenty works by these masters to be seen. Spread across a number of excellent museums. It's not all Dutch Masters either. And the contemporary cultural scene is also well known internationally. The Netherlands is somewhere to be creative in.

It's not just great art this country has produced either, there are a number of architectural wonders, and some of the most spectacular gardens imaginable. The Keukenhof Gardens feature on innumerable bucket lists.

To get a sense of where this country has come from visit Waterland and the the Zaan Region, where you’ll find the typical old Dutch villages of windmills and wooden houses - and clogs. And the Zaanse Schans Open Air Museum.

Amsterdam is wonderful, and worth returning to again and again, but it's also worth taking to the canals, or the bike paths, like the Dutch, and exploring further afield. Visit Edam, for the cheese and the hand-operated drawbridges; modernist Rotterdam, with its world class museums and maritime legacy; Haarlem with its peaceful, canal-side charms; Maastricht for its fantastic museums, the Roman and Spanish ruins and impressive French and Belgian architecture; Vermeer's Delft, with its wonderful old buildings, compact old town and the distinctive blue and white pottery; and Utrecht with its castles and towers. And then there's the famous Den Hague, seat of the Netherland’s parliament and home to the royal family, the embassies and several of the country’s best museums and galleries - but not the capital city.

And those are just the ones we've all heard about. Some of the nicest are really best discovered for yourself, along the canal or tulip-lined bike path.

Still not sure which is the best place to stay The Netherlands for you? 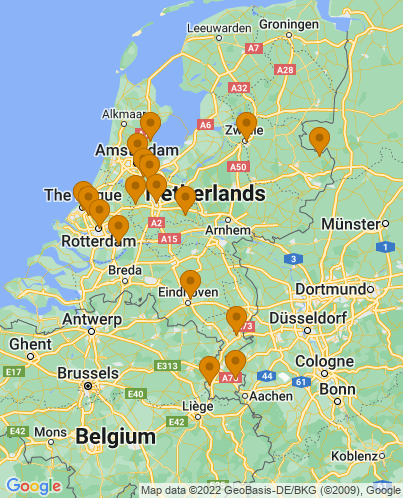