No country can be easily distilled into a paragraph, but Japan’s contradictions make it even harder than most. Most of the time it’s thought of as modern and progressive, a place with a vending machine for everything, space age transport and a forward looking attitude towards technology. But when you’re there it feels ancient, traditions and aesthetics hundreds of years old are alive and well, temples are still fit for purpose - despite the way skyscrapers may now crowd around them, Zen rock gardens and Tori Gates still promise the same opportunity for spiritual reflection, and time is still taken over the details of every day life. People still know how to whisk matcha (green tea), and serve the right kind of carefully made treats to correspond with the seasons. And we think our recommendations for the best places to stay in Japan should reflect this pleasure in the detail, and in beauty for beauty’s sake.

When it comes to the islands, Kyushu, Japan's southern and westernmost island, is described as magically beautiful, with its active volcanoes, near-tropical coastline, rolling green hills and mountainsides carpeted pink with the petals of rhododendrons. If you want to hike, share a snack with a monkey, explore ancient forests, bathe in hot springs or try the tea ceremony then Kyushu is a good place for it.

Shikoku is the smallest of Japan’s four main islands, tucked in to the south of Honshū and east of Kyushu. Shikoku is home to the 88 Sacred Temples of Shikoku, which is Japan’s most famous pilgrimage trail, and is synonymous with Japan’s spiritual side, as well as being known for its natural beauty (again). The Pacific coast region is particularly spectacular, but there are mountains, valleys and rivers aplenty too. Shikoku is also known for its yuzu fruits, which grow very well here.

And Honshū is the big island in the middle, the one with Tokyo, Kyoto, Mt. Fuji, Osaka, Hiroshima, Kobe, Nagoya, Nara and Kansai, to get us started. To get a sense of size, Honshū is actually a bit bigger than Great Britain. The Japanese Alps and Mt. Fuji, and other mountains and volcanoes, give Honshū some rather dramatic topography, as well as some world class ski fields. But Honshū has lush tropical forests to the south too. As well as rich, fertile lands where much of Japan’s food and textile production has always been centred. And there’s a very rich cultural heritage on this island, as there is on Japan’s other islands, with numerous beautiful and famed temples and shrines. Rather brilliantly, Honshū is connected to Hokkaidō, Kyushu and Shikoku by a series of bridges and tunnels.

Even if you’re not planning to spend too much time in Tokyo, it would be a shame to miss this fantastic city of any itinerary of Japan. The top of the Tokyo highlights list usually includes Tsukiji Fish Markets, Harajuku and Shiibuya, the Edo-Tokyo Museum, the gardens around the Imperial Palace - and many of the city’s other gardens, and then the temples - which are all over the place, from grand temples surrounded by vast parks to tiny temples squeezed in between huge stores and skyscrapers.

Kyoto lets you back into the world of old Japan, of its religion and royalty and commerce and nightlife. Gion’s streets beckon welcomingly after a day of gazing in awe at the time and positive energy funnelled into the construction and upkeep of Kyoto’s thousands of temples and shrines, proving there is still a lot of life in this beautiful old girl yet. Once a place of geisha silks, parks carefully laid out to reflect the seasons, narrow cobbled streets and wooden dwellings, and classically beautiful art and writing, these things remain but are kept aside like museum pieces rather than part of the regular cycle of life. The top the list of Kyoto’s highlights usually features the Fushimi Inari-taisha Shrine which has incredible tori gates, the Kinkakuji Temple, which is also sometimes known as the Golden Pavillon, and Nijo-jo Castle.

Nara is Japan’s second city, after Kyoto, when it comes to cultural beauty and incredible history. And it was Japan’s first capital. It was founded around 1300 years ago, and built around an incredible park: Nara-kōen, which is filed with ancient temples, treasures and relics.

Osaka is a thriving commercial centre, but in a very different way to Tokyo. This is a younger city, with a less serious attitude, and plenty of chic, trendy bars and restaurants. And more tech start-ups and A.I. related businesses. And fewer historic attractions, like castles, shrines and temples, than other Japanese cities.

Hiroshima is best known for what happened here one August day at the end of the second world war, however it’s now a beacon of peace, as well as a reminder of what we’re capable of doing to each other. While most people spend most of their visit around the Peace Memorial Park, modern Hiroshima is beautiful, and not depressing at all, with its tree-lined boulevards and lively cafes. It’s also a very friendly place.

See all » 32 hotels in Hokkaidō

See all » 14 hotels in Okinawa

See all » 32 hotels in Hokkaidō

See all » 14 hotels in Okinawa 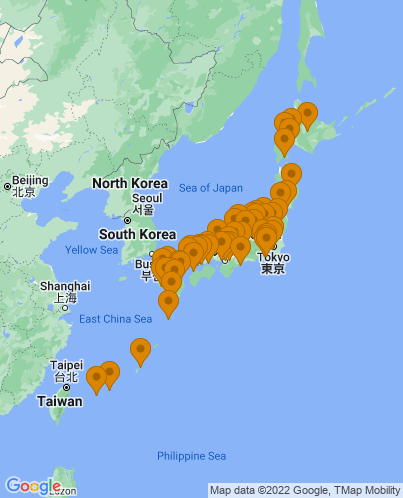